On Diwali eve, the Centre announced a reduction in excise duty on petrol by Rs 5 per litre and diesel by Rs 10 per litre. 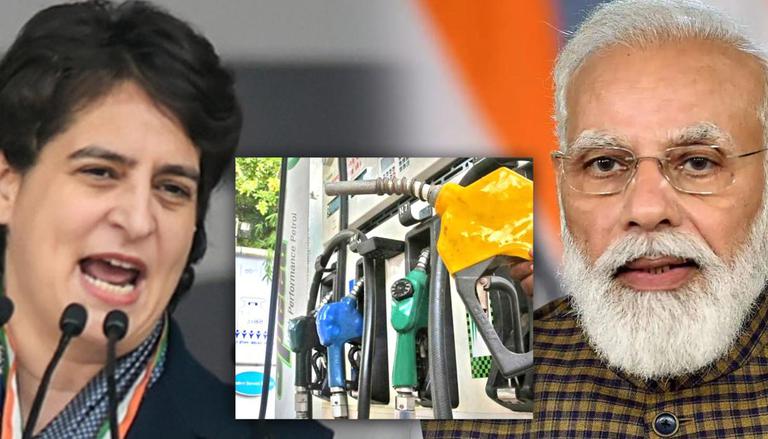 
After the Centre announced a reduction in petrol and diesel excise duty, Congress on Thursday asserted that the decision was 'made out of fear'.

Taking to her official Twitter handle, party's General Secretary Priyanka Gandhi Vadra said the decision was 'not from the heart,' and urged the public to give a reply to what she referred to as the 'Vasooli government' in the upcoming elections. Assembly elections in 7 states- Goa, Manipur, Punjab, Uttar Pradesh, Uttarakhand, Gujarat, and Himachal Pradesh-are scheduled for 2022.  Strangely, Vadra is yet to break her silence over the extortion scandal that has arisen in Maharashtra, where the Congress is part of the ruling alliance.

Earlier in the day, Congress leader KC Venugopal called the Centre's move to reduce excise duty on fuel after exorbitant cumulative increases 'an eyewash'. He accused the Centre of not letting the benefits of low international crude oil prices trickle down to the public, by increasing the excise duty, and added that his party will continue to fight against this 'daylight robbery'.

READ | Fuel prices down in states after Centre's excise duty cut; Here's how much prices dropped

The meagre reduction of excise duty after exhorbitant cumulative increases in the last years is nothing but an eyewash.

When the international crude oil prices were lowest, the Modi Gvt did nothing to pass the benefit to common people but increased the excise duties.

Another senior leader, Randeep Singh Surjewala uploaded a video to elaborate on the 'Jhumlanomics' of 'Modinomics'. He said that the Centre government in 2021 hiked the excise on petrol and diesel by Rs 28 and Rs 26 per litre respectively, and then respectively reduced it by Rs 5 and Rs 10 and called it 'Diwali gift'. Surjewala highlighted that in May 2014, under the Congress government, excise on petrol was Rs 9.48 and that on diesel was Rs 3.56 per litre. Giving the figures, he asked, 'When is it getting back to 2014 standards?'

WE RECOMMEND
Salman Khurshid says Priyanka Gandhi is Congress' leader; party wants her as UP CM face
Punjab: Rebellion in Congress ranks as Patiala Mayor announces support for Amarinder Singh
Congress attacks Centre after reduction in excise duty on fuel; calls it 'an eyewash'
Priyanka Gandhi Vadra claims Loot via electricity bills to end when Cong is in power in UP
Captain Amarinder Singh resigns from Congress with scorching 7-page letter to Sonia Gandhi