Haryana Health Minister Anil Vij said on Saturday that Congress and the country would be at peace if Navjot Singh Sidhu observes a vow of silence permanently. 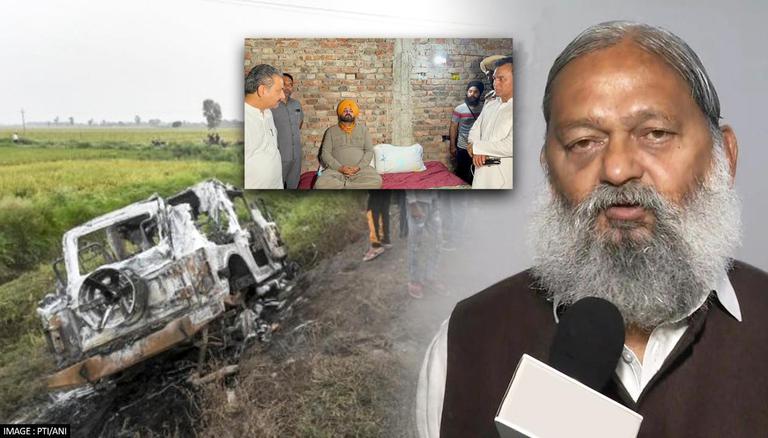 
A day after Congress leader Navjot Singh Sindhu went on a hunger strike and pledged to remain silent on the Lakhimpur Kheri violence, Haryana Health Minister Anil Vij on Saturday took a dig at the former Punjab Congress chief, saying that the country and Congress party would be at peace if he observes a vow of silence on a permanent basis.

Vij also slammed the Congress and called it a sinking ship. He said,

"There is infighting in Congress. When a ship starts sinking, it starts to falter. In the same way, they are faltering again and again. This is indicating that the ship of Congress is about to sink." While speaking about the Lakhimpur Kheri violence, Vij extended his support to the Yogi Adityanath government and stated, "The UP government is taking absolutely fair action."

Navjot Singh Sindhu on Friday sat on a hunger strike after meeting the family of journalist Raman Kashyap, who was killed in the violence at Uttar Pradesh's Lakhimpur Kheri on October 3. Earlier on Thursday, Sidhu stated that he carry out a hunger strike at the residence of the deceased until action is taken against MoS Ajay Misra's son Ashish Misra.

Pressures by UP administration to sabotage the Satyagraha at 2 AM in the night … Braveheart Pawan Kashyap (Brother of Shaheed Journalist Raman Kashyap) stood his ground for justice !! https://t.co/iNWnZNe0Gs

How did the Lakhimpur Kheri violence unfold?

On October 3, when farmers were protesting against the three Farm Laws at Lakhimpur Kheri outside an event venue where Deputy CM Keshav Prasad Maurya was scheduled to be present, one of the farmers was allegedly shot dead by Union MoS Ajay Misra Teni's son Ashish Misra and two farmers were killed after his car ran over them.

Before the killings, the protesters were seen holding black flags against Maurya's arrival at Maharaja Agrasen Ground. After the incident, farmers allegedly started pelting stones at the car which had overturned, killing 4 people - including Misra's driver.

The bodies of the four farmers were kept at the spot as farm leaders said that last rites will not be performed until their demands are met. Sanyukta Kisan Morcha (SKM) has demanded immediate removal of Union MoS Ajay Kumar Misra from his post and the booking of his son for murder. However, Ashish Misra has refuted those allegations and said that he was not present at the spot when the violence took place.

The UP police on Monday had filed an FIR against Ashish Misra accusing him of murder. Misra, who was summoned by police in connection to the probe of the violence, did not report on Friday. His father Ajay Misra said that his absence was due to "health reasons." However, Ashish Misra arrived at the Crime Branch office, Lakhimpur, on Saturday and has been detained by the police.