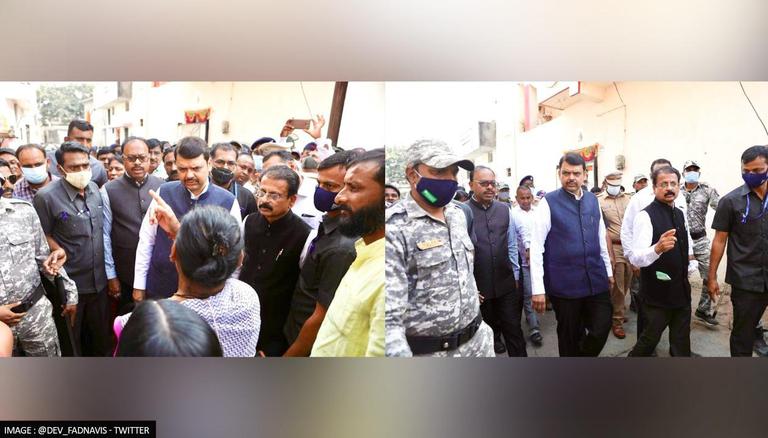 
Former Maharashtra Chief Minister and Bharatiya Janata Party (BJP) leader Devendra Fadnavis on Sunday reached Amravati in Maharashtra and interacted with the citizens who were subject to the recent cases of violence. He met people in different localities. BJP leader Chandrashekhar Bawankule also accompanied Fadnavis while at his visit.

Hearing what they went through is very disturbing.
This morning, we visited #Amravati and met various citizens in different localities, who suffered damages, pain during recent violence.
Former Minister @cbawankule & other leaders too joined.@BJP4Maharashtra #Maharashtra pic.twitter.com/X3aSSlLKOR

While at his visit to Amravati, Devendra Fadnavis took stock of the violence and suffering caused in Amravati. The former Maharashtra CM visited Masanganj, Hanuman Nagar, Kholapuri Gate areas and interacted with the violence-affected citizens. He assured assistance subjecting to the violence faced by the citizens.

People who are not responsible for anything are booked by the police: Fadnavis

Devendra Fadnavis stated, "Very serious, worrisome grievances and pain was expressed by them." Fadnavis also attested to the fact that those who were not responsible for any criminal activities were booked by the police and were further facing actions.

People who are not responsible for anything are booked by the police and are facing actions.
Visited Masanganj, Hanuman Nagar, Kholapuri Gate areas in #Amravati and interacted with citizens.
Very serious, worrisome grievances and pain was expressed by them. pic.twitter.com/zLvB9xIliO

Notably, the Republic Media Network had carried out a sting operation on Amravati violence. Following that, the Maharashtra cyber cell had identified 36 fake social media handles responsible for instigating violence. According to the on-ground information accessed by Republic TV, these users were posting videos on Tripura violence and people managing these accounts are being identified through IP addresses.

The fake handles were also passing hateful religious messages on social media further instigating a communal angle. The Republic Media Network had earlier established that hate was amplified on both sides of the slugfest. The alleged Tripura violence was used as a tool of communication. Based on sting operations and WhatsApp chats, it was revealed that a WhatsApp group was used to mobilise a crowd.

On November 12, violence erupted in the Amravati, Nanded and Nashik districts of Maharashtra in protest against the alleged violence in Tripura. In Amravati, thousands of people gathered outside District Collector's office to submit a memorandum demanding an end to purported atrocities against minorities in the northeastern state. Subsequently, stone pelting was reported. After the violence during the BJP protest, internet services were suspended and a curfew was imposed.