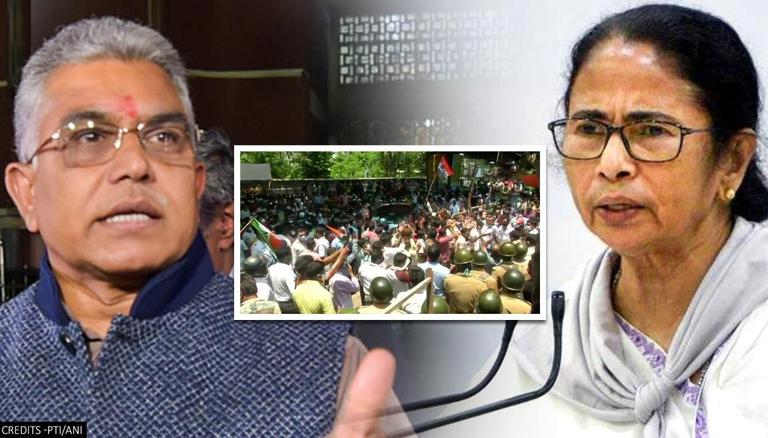 
In a huge development, West Bengal BJP chief Dilip Ghosh filed a complaint against Chief Minister Mamata Banerjee for provoking violence in the state. As per the plaint registered with the Kotwali Police Station in West Medinipur, Ghosh claimed that she tried to wedge a divide between the locals and outsiders from the beginning of the Assembly election campaign. Maintaining that her diatribe against "outsiders" was unlawful, he opined that the TMC supremo should be held responsible for any violence resulting out of the linguistic divide.

Moreover, the Medinipur MP accused the WB CM of instigating the people to attack the Central Armed Police Forces. In a speech dated April 7, Banerjee told the crowd, "And if CAPF create disturbances, I tell you ladies, a group of you go and gherao them while another group will go to cast their votes. Don't waste your waste. If you engage yourself only in restraining them they will be happy that you did not cast your vote".

Moreover, she also warned the CAPF that they would face legal consequences for their acts and high-handedness at the "behest of BJP" after elections. Ghosh also delved into the violence unleashed in the state since the declaration of the Assembly election results. On May 2, TMC swept the polls by winning 213 seats trouncing its nearest rival BJP that could bag only 77 seats. He has claimed that at least 21 BJP workers have been killed in the last few days while over 15,000 incidents of violence have taken place.

Here is a copy of the police complaint: 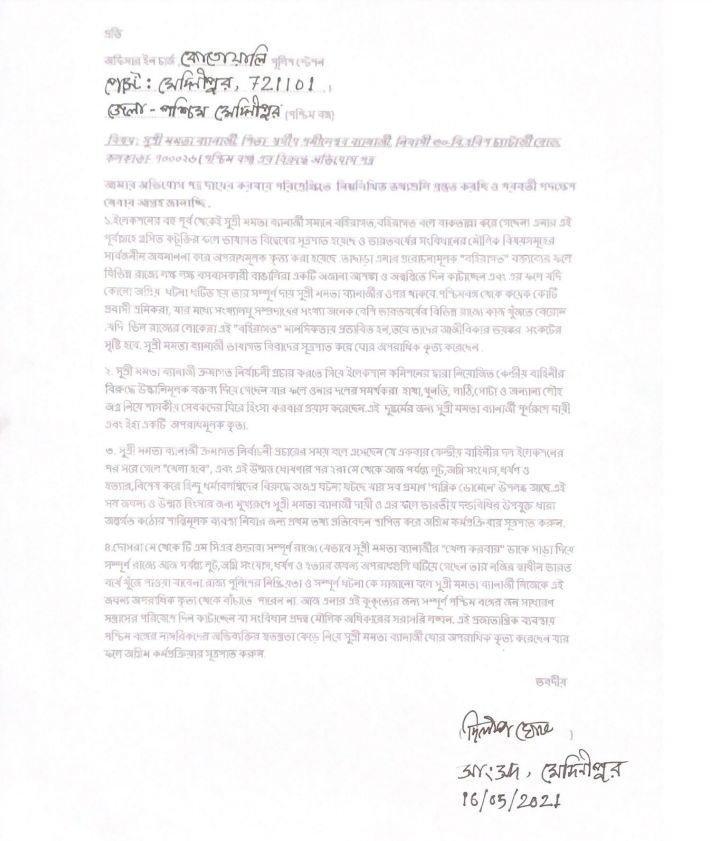 BJP, Congress, CPI(M), TMC and ISF have been up in arms over the violence which claimed at least 16 lives after the declaration of poll results. While the MHA sought a detailed report from the state government regarding the "post-election violence targeting opposition political workers in the state" and sent a 4-member team there, PM Modi called up Dhankhar and expressed his anguish at the law and order situation. Though TMC attributed the deaths to "intra-BJP fights," Banerjee requested everyone to remain peaceful.

Meanwhile, BJP president JP Nadda visited WB for two days where he met the families of the affected party workers in Pratapnagar, Beliaghata, North 24 Parganas and Gopalpur. In another development, CM Mamata Banerjee announced a compensation of Rs.2 lakh each to the kin of the deceased persons. She also warned that her government will act against anyone circulating "fake videos" on the post-poll violence. Ignoring Banerjee's opposition, the WB Governor visited violence-hit areas in Cooch Behar and areas of Assam where people from the state are camping.