After the Maharashtra Cabinet meeting on National Population Register (NPR) and National Register of Citizens (NRC), The Samajwadi Party's Yuva president for Mumbai, Farhan Azmi, the son of the legislator, and Maharashtra party president, Abu Asim Azmi on Saturday slammed the Maha Vikas Aghadi led Maharashtra government. Taking to the microblogging site Twitter, Azmi said that under the leadership of Chief Minister Uddhav Thackeray the citizens of Maharashtra were about to get a 'Maha Dhoka.'

He also urged Congress leader Rahul Gandhi and SP chief Akhilesh Yadav to reject the NRC and NPR. This statement of Azmi comes after reports stated that the Shiv Sena chief Uddhav Thackeray has decided to go ahead with the National Population Register (NPR) in the state from May 1 in a snub to allies NCP and Congress. 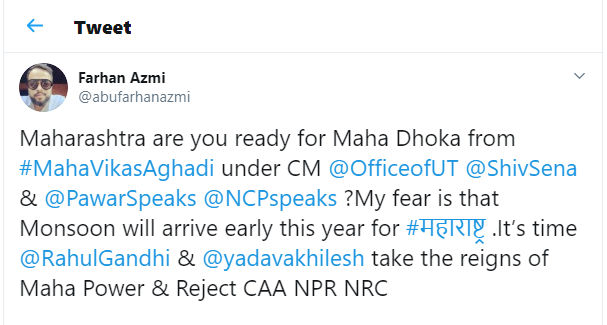 'Maharashtra government to have thorough discussion on NRC & NPR': Ahwad

Earlier on Saturday, Maharashtra Cabinet Minister Jitendra Awhad on Saturday said that the state government will have a thorough discussion over the NPR and NRC and a valid decision will then be taken by the government for the benefit of the citizens.

Taking to the microblogging site, Awhad said, "Had a discussion with Chief Minister of Maharashtra Mr. Uddhav Thackeray and it was decided that a discussion would be held for the benefit of the citizens by discussing all matters related to NPR and NRC."