Senior Superintendent of Police, Ferozepur, Harman Hans, has been suspended after PM Modi's convoy faced a massive security breach during his visit to Punjab. 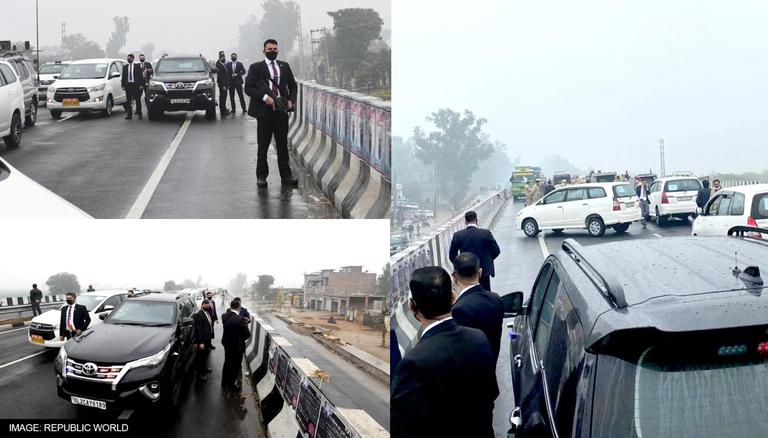 
The Senior Superintendent of Police (SSP) of Punjab's Ferozepur has been placed under suspension after Prime Minister Narendra Modi's cavalcade faced a major security lapse during his visit to poll-bound Punjab. SSP Harman Hans was suspended after the incident on Wednesday.

Reacting to the never-before witnessed security breach of the Indian Prime Minister, the Bharatiya Janata Party (BJP) said that the incident was unprecedented. Gajendra Singh Shekhawat, Union minister and the BJP’s election in-charge for Punjab, slammed the Congress-led state government. Shekhawat lambasted the Congress for erupting with joy over the breach of security and underlined that this is a 'conspiracy' and 'political frustration of the party.'

'Action should be taken against those who are involved and not on small officials': BJP

The BJP's election in-charge for Punjab, Shekhawat, said that the day will be written in "black words in history."

"The Prime Minister was coming to give welfare schemes to the people of Punjab. He was stopped for 15-20 minutes. This is a failure of the state government," he said.

Shekhawat alleged that the details of PM Modi's route were leaked to the individuals who planted themselves atop the flyover where PM Modi's convoy was forced to halt. Underlining the poor security situation in Punjab under the Congress, the BJP leader reiterated that this was "a failure of police and the state government."

"Congress workers were enjoying over the breach of security. This is a conspiracy. Action should be taken against those who are involved and not on small officials," said Shekhawat, adding, "This is political frustration of the Congress party."

Lambasting the Punjab Congress party, Union Minister Smriti Irani questioned who in the Punjab Government gave information about the PM's route to individuals who were protesting atop the flyover.

Speaking at a news briefing, Union Minister Irani said, "The Congress government in Punjab allowed this... Never a state government has constructed a scenario that it would put the Prime Minister under harm. I am sure the nation shares our outrage …We know the Congress hates Modi, but today they tried to harm the Prime Minister of India. The DGP Police of Punjab claims that he is unable to provide security of the PM of the country. The security protocol was dismantled to bring harm to the PM."

PM Modi was forced to postpone his Ferozepur rally as his security was breached. His convoy was stuck for 15-20 minutes due to a road blockade.

Following the incident, the Ministry of Home Affairs (MHA) said in a statement, "The PM’s schedule and travel plan were communicated well in advance to Punjab Government. As per procedure, they have to make necessary arrangements for logistics, security as well as keep a contingency plan ready. Also in view of the contingency plan, Punjab Government has to deploy additional security to secure any movement by road, which were clearly not deployed."

The MHA - taking cognisance of this serious security lapse - has sought a detailed report from the state government. The state government has also been asked to fix responsibility for this lapse and take strict action.