Notably, Shandilya Giriraj Singh had earlier also jibed Rahul Gandhi for his remarks after he called for setting up a Fisheries Ministry under the Central govt. 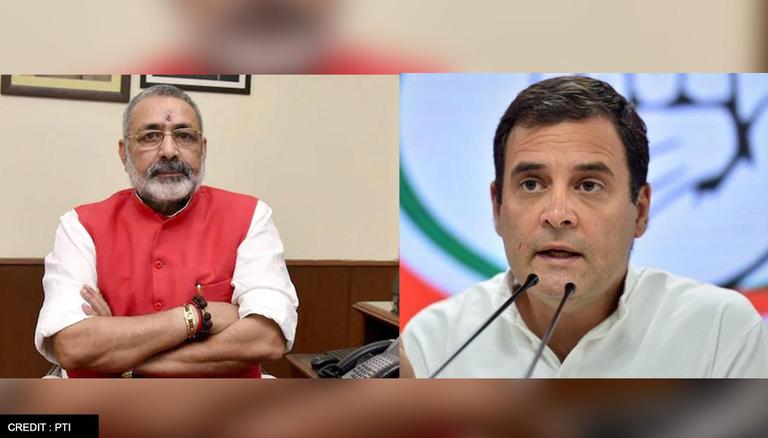 
After Rahul Gandhi lamented on social media about the lack of oxygen plants along with huge 'lack of sensitivity' and 'truth' in reporting of deaths due to COVID-19 by states and union territories, Bharatiya Janata Party leader Shandilya Giriraj Singh took a jibe at the former Congress Party President of losing his mind 'forever'.

Rahul Gandhi took to social media to criticise the ruling saffron party for its incompetence in providing oxygen to COVID patients in the country during the COVID pandemic while deploring the government for huge lack of 'sensitivity'.

Replying to the remarks made by the 51-year-old Congress leader, the Union Minister took a swipe at his comments in Italian, stating that he lacked his brain 'then', 'now', and that he will lack it 'forever'. He further stated that since COVID death data is compiled by the states, the Wayanad MP should ask states governed by his party to submit a modified list and until then stop 'lying'.

"I would say about this prince: he lacked the brain then, he misses it now and he will miss it forever. These lists are compiled by the states. You can tell the states governed by your party to submit modified lists. Until then, stop lying," Giriraj Singh said in Italian.

Notably, the Congress leader had on July 14 attacked the centre over the alleged vaccine shortage in the states, saying there are 'jumlas but no vaccines. He tagged a media report which claimed that Delhi along with many other states was facing a shortage of vaccines but the centre had denied it.

Congress has been criticising the government over its vaccination programme alleging that it is slow. The health on the other hand had made it clear that more than 1.91 crore COVID vaccine doses are still available with the states, union territories and private hospitals to be administered.