On Tuesday, the People's Alliance for Gupkar Declaration reiterated its commitment to fight for the restoration of Article 370 and Article 35A. 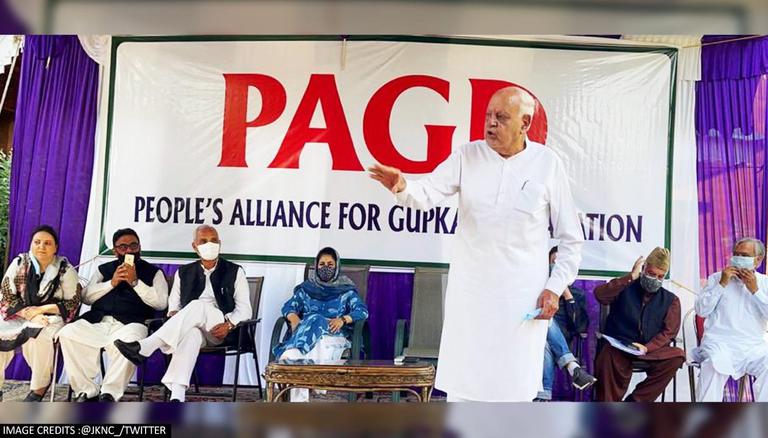 
On Tuesday, the People's Alliance for Gupkar Declaration reiterated its commitment to fight for the restoration of Article 370 and Article 35A. In a meeting held at NC president Farooq Abdullah's residence in Srinagar, leaders of the constituent parties such as PDP chief Mehbooba Mufti, CPI(M)'s MY Tarigami and JKANC senior vice president Muzaffar Ahmad Shah participated and passed a resolution in this regard. On this occasion, former J&K CM Omar Abdullah demanded that Assembly polls should be conducted only after the restoration of statehood.

Meanwhile, Mufti alleged that Article 370 was abrogated in an "unconstitutional, illegal and immoral" manner. Incidentally, this resolution comes days after a joint statement released by 19 opposition parties including NC and PDP omitted any mention of the demand to restore Article 370. On August 20, the parties called upon the Centre to release all political prisoners in the Union Territory, restore full statehood and conduct free and fair elections at the earliest.

Tarigami was quoted by ANI as saying, "Silence in Jammu Kashmir is depicted as normalcy. We appeal people of India that we want our rights. Today we gathered to sent out a message throughout the country, we are committed to seek our constitutional rights. We demand article 370, 35A and statehood must if restored fully. This is our constitutional right. We have adopted a resolution to restore the constitutional position of Jammu & Kashmir and Ladakh under Article 370 and 35A."

The formation of the Gupkar Alliance

The Gupkar Declaration was a resolution passed by NC, PDP, Congress, CPI(M), JKPC and ANC on August 4, 2019, pledging to protect the "identity, autonomy and special status" of J&K. However, a presidential notification along with the passage of requisite legislation in both Houses of Parliament resulted in Article 370 becoming virtually redundant. Simultaneously, key leaders including Farooq Abdullah, Omar Abdullah, and Mehbooba Mufti were detained.

When the Gupkar signatories met on October 15, 2020, after the release of Mehbooba Mufti, they declared the formation of the PAGD. While it tasted electoral success in the District Development Council polls by emerging as the single-largest coalition with 110 seats, BJP too made inroads in the Union Territory by becoming the single-largest party with 75 seats. The PAGD's constituents- NC, PDP, JKPC, CPI(M), and JKPM bagged 67, 27, 8, 5, and three seats respectively. However, the opposition unity proved to be shortlived as the Sajad Lone-led party pulled out of the alliance on January 19.

In a sign of reconciliation with the Centre, multiple PAGD leaders attended a meeting with the PM on June 24.  These leaders shared their views on giving a further fillip to the democratic process in J&K. In this meeting, the Centre made it clear that delimitation and peaceful Assembly polls will be "important milestones" in restoring statehood as promised in the Parliament.