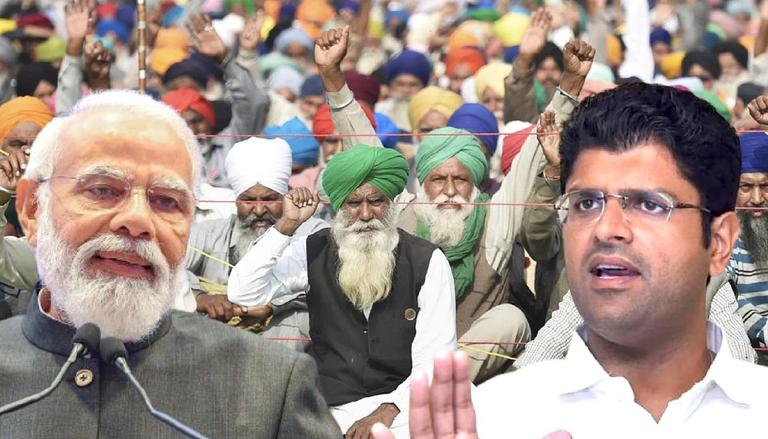 Asserting his confidence in the PM Modi-led union government, Dushyant Chautala assured the farmers that the laws will be taken back in the upcoming winter parliament session, which is set to commence in the coming 10 days.

He said, “If someone claims that the laws are not repealed, then there are only 10 days left in the winter session. The first thing the PM will do is withdraw the farm laws.”

The Jannayak Janata Party co-founder took the blame for failing to make the farmers understand the benefits of the three laws while he said “It is our drawback that we couldn’t explain the benefits properly.” Speaking on Haryana’s model of farmer schemes, Chautala remarked that other states should also implement the Haryana model.

Responding to the claims by the opposition that the BJP government has decided to woo people ahead of the assembly elections, Chautala replied, "The farmers got what they wanted. This decision has nothing to do with the elections.”

Earlier in the day, the Haryana Deputy CM congratulated farmers on the repeal of the laws on Guru Purab and asked them to return to their homes on the auspicious occasion. "We welcome Centre's decision to repeal the FarmLaws on the occasion of Guru Purab. This is a commendable step for the reinstatement of peace & harmony in society. I appeal to all farmer organisations to end their protest. We'll continue to make an effort for farmers' welfare," he tweeted.

The JJP- BJP alliance government in Haryana had faced the fury of the protesting farmers several times on various issues in the past year. Farmers from Punjab and Haryana have dominated the protests on the border sites of the national capital, thus the announcement of withdrawal of the farm laws is set to have a significant impact on the politics of the state.

Prime Minister Narendra Modi declared on Friday that the three Central agriculture legislation passed in 2020 would be repealed. Since the passage of the three agricultural laws by the Centre in 2020, farmers from Punjab, Haryana, Uttar Pradesh, Rajasthan have been resisting them for more than 350 days.