Moments after the Governor of Maharashtra rejected Shiv Sena's request for more time on Monday,  he has invited the third-largest party NCP to form a government

Moments after the Maharashtra Governor Bhagat Singh Koshyari rejected Shiv Sena's request for more time on Monday,  he has invited the Nationalist Congress Party (NCP) to form the government in the state as it is the third-largest party.

#LIVE | We were here the whole day monitoring the developments. Governor called me and invited to meet him: Ajit Pawar, NCP pic.twitter.com/2kOM7HGAxk

Earlier, Shiv Sena leader Aditya Thackeray in a press briefing said, "We have requested more time from the Governor, which he has declined. Our claim has not been rejected. Both parties have been speaking to us. As the second-largest party, it was our right to come here. We want a stable govt in Maharashtra. We are willing to form the government and asked for an extension of 48 hrs to fulfil all procedures."

Statement from the Governor of Maharashtra:

Delegation of Shiv Sena met Governor and expressed willingness to form govt. However, they couldn't submit a requisite letter of support. They submitted a letter requesting a 3-day extension for submitting letters of support. Governor expressed the inability to give a further extension.

While Shiv Sena mouthpiece Saamna claimed that both NCP and Congress had given letters of support to the Shiv Sena, in a statement, the Congress Working Committee after meeting on Monday morning has said that the party will hold "further discussions" with the NCP. Sonia Gandhi spoke to both, the NCP patron Sharad Pawar and Sena chief Uddhav Thackeray earlier on Monday over the political scenario unfolding in the state. 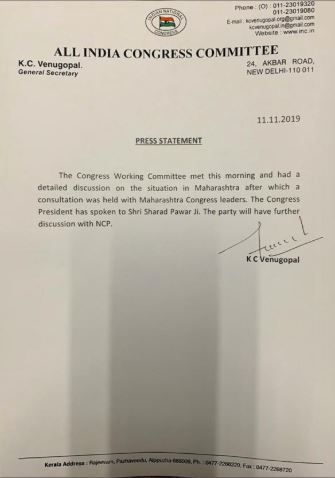 WATCH | Pre-polls, when Aaditya Thackeray said he wasn't after any post

The chief of AIMIM, Assaduddin Owaisi, took to Twitter amid the ticking clock for government formation in Maharashtra and said that the AIMIM will not support the "Shiv Sena-Congress" government. This comes as continuous meetings have been carried out to strike a deal for the formation of a government in Maharashtra.

. @aimim_national has 2 MLAs in Maharashtra & we will not be supporting the Shiv Sena-Congress government. A letter to the same effect will be sent to the Governor of Maharashtra briefly