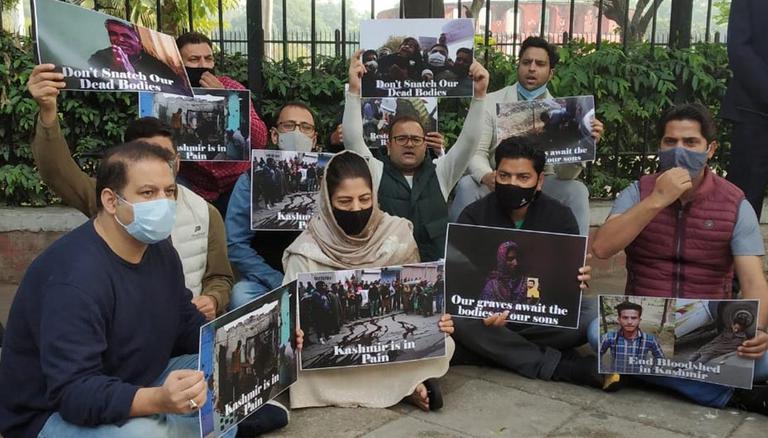 
Staging a protest in Delhi's Jantar Mantar, PDP chief Mehbooba Mufti on Monday, claimed that J&K had turned from Gandhi's Kashmir to Godse's Kashmir. Demanding that bodies of encounter victims be returned to their kin, Mufti lamented that civilians were killed as soon as they step out of their houses. Mufti has been demanding the return of the body of Mohammad Amir - a suspected militant - who was killed in the Hyderpora encounter.

"There is no freedom to talk. If anyone walks outside, he is shot dead, our Kashmir has become a graveyard. People are in danger as soon as they step outside, either they are shot or are charged UAPA. Despite being a Muslim majority, J&K shook hands with India," said Mufti.

Batting for reinstating Article 370, she said, "If farm laws were repealed after 1 year, then kashmir has sacrificed even more. Jammu Kashmir is no more Gandhi's Kashmir but is becoming Godse's Kashmir. My issue is not with elections, my issue is Jammu and Kashmir". Urging the Centre to talk to Pakistan, she added, "Vajpayee ji started to open doors between india and Pakistan and that should move ahead".

On November 15, two civilians were among four killed during the cross-fire between the militants and the security forces in Hyderapora. Two civilians - Altaf Bhat and Mudassir Gul -- were also killed in the firing, triggering an angry reaction from their family who claimed they were innocent and not "terror associates" as claimed by the police. A third person - Mohammad Amir - who was killed, was suspected to be a militant in Hyderpora, where an illegal call centre and a terror hideout were allegedly being run, as claimed by the police.

Mufti, on the other hand, claimed that no militant was killed in the Hyderpora encounter.  Mufti alleged, "They (police) say there was a militant. Where is the militant killed? Where is his photo? We believe there was no militant and three civilians were killed and after that, they were declared as OGW (over-ground worker)," she said during a protest march against the Hyderpora incident.

After the bodies Baht and Gul were returned to their families, the chorus for handing over the mortal remains of Amir grew louder. A magisterial inquiry has been ordered in the Hyderpora encounter case by an officer of Additional District Magistrate (ADM) rank. The encounter comes in the wake of a slew of targetted killings by terrorists in Jammu-Kashmir.