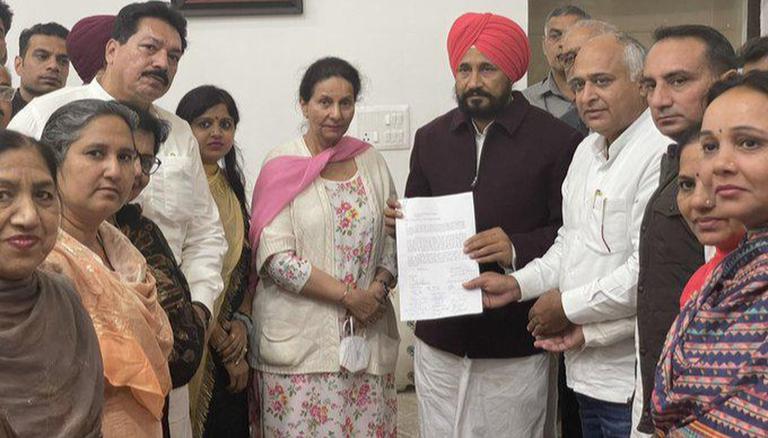 
Stirring fresh controversy in the Punjab political sphere, former Chief Minister Captain Amarinder Singh's wife and Member of Parliament Preneet Kaur along with Patiala's mayor Sanjeev Sharma Bittu met Chief Minister Charanjit Singh Channi on Sunday. The meeting, which is said to be on the rebellion against Sanjeev Sharma Bittu as the Patiala Mayor, is the first-ever meeting between Charanjit Singh Channi and Preneet Kaur after her husband Amarinder Singh resigned from Congress.

Earlier, the Patiala Mayor announced support for former Punjab CM Captain Amarinder Singh and his new party. In a recent public gathering, Sanjeev Bittu raised slogans of 'Captain Zindabad' following which the crowd too reciprocated and reposed their faith in Singh. Thereafter, veteran Congressmen including Congress in charge Harish Chaudhary reached Patiala, and there emerged a possibility that Sanjeev Bittu would be removed from the office of Patiala Mayor for supporting Captain Amarinder Singh. However, the party chose not to take that risk as the former CM's wife was an MP from Patiala, and the Singh family was quite popular in the region.

Sanjeev Singh Bittu, however, has refuted claims suggesting that the meeting was regarding the rebellion against him, by sharing a picture captioned," In order to expedite the Dairy shifting Project, Today meet Hon'ble CM Charanjit Singh along with Respected Maharani Preneet Kaur and Municipal councillors."

Days after relinquishing the position of the Punjab Chief Minister, Amarinder Singh left Congress addressing an elaborate 7-page letter to party president Sonia Gandhi. In the letter, the former CM spoke at length of pinnacles the party achieved under him, including the landslide victory in the 2017 polls. He also outlined that the promises of the manifesto of the 2017 polls, had all been achieved under him. He also outlined in the letter how he was humiliated by Sonia and Rahul and Priyanka Gandhi, who he claimed her still consider his children. He cited the humiliation as the reason to leave the party.

On the same day, Amarinder Singh announced his own party 'Punjab Lok Congress', which is awaiting approval for name and logo from the Election Commission. It is this party, with which, Captain Amarinder intends to contest the 2022 Punjab Elections, for which he has sought a seat-share alliance with the BJP, and other like-minded parties.

Interestingly, his wife Preneet Kaur has remained mum on the issue of whether she will continue in Congress or join her husband Amarinder Singh's party. When Amarinder Singh was asked about the same, he called the question 'silly'.