The Communist Party of India (Marxist) on Monday condemned the "brutal" attack on the students and teaching faculty of Jawaharlal Nehru University (JNU) by outsiders on January 5. CPI(M) General Secretary Sitaram Yechury accused the BJP-led central government saying that the attacks on JNU students and teachers is a part of a "larger conspiracy of an assault on reason by the BJP government." Yechury added that all institutions of higher education are targeted and the accountability must be fixed for the assault on JNU. He demanded that the culprits should be punished.

'President must immediately sack the VC'

The Polit Bureau of the CPI(M) in a statement demanded that the Vice-Chancellor of the university should be sacked as he has been "instrumental in systematically undermining and dismantling the country's premier university." The statement also alleged that the VC and the university authorities allowed outsiders to go on "rampage" for hours before asking for police intervention. "The President of India as the Chancellor of the University must immediately sack the Vice-Chancellor and ensure that normalcy prevails in the campus," the statement said.

"Unlike what the Union Home Minister sought to portray as a clash between two groups, the video recordings of this rampage, that have gone viral, and the screenshots of WhatsApp groups like  “Unite Against the Left”, clearly show that this attack was preplanned and executed with the full knowledge of the authorities. From the slogans that these outsiders were shouting, it is clear that they are part of the RSS-BJP. These goons must be punished forthwith," it added. 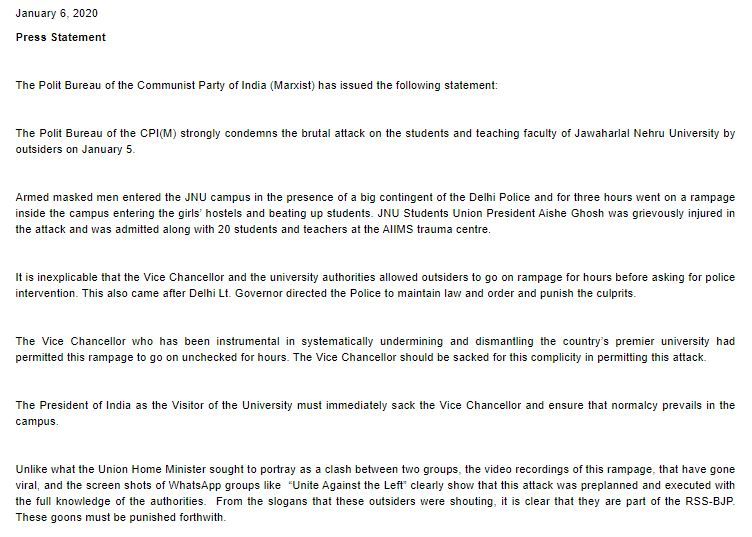 Twenty-three people injured in the JNU violence have been released from AIIMS while some are still undergoing treatment. Hours after the attack, Delhi Police on Monday has filed an FIR under sections of Public Property Damage Act and Rioting Act. Devender Arya, DCP, South-West, has said, "We have taken cognizance of yesterday's violence and have registered an FIR. Social media and CCTV footages will be part of the investigation."