The clarification comes after Congress' Priyank Kharge questioned 'disappearance' of Bitcoin. The case dates back to 2020 when Srikrishna Ramesh was arrested. 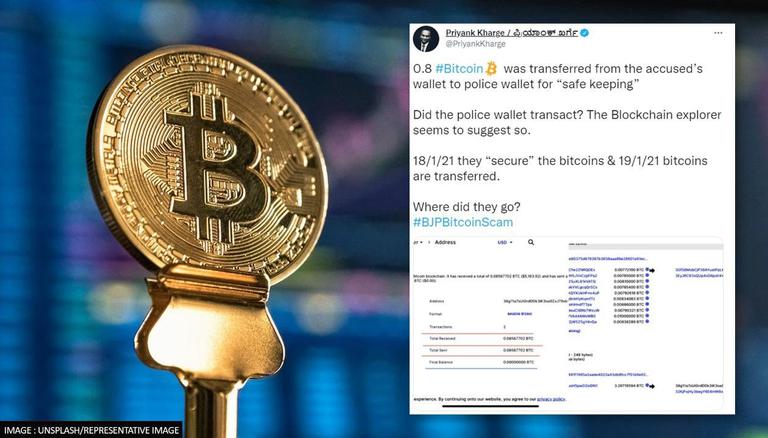 
The Karnataka Commissioner of Police on Thursday responded to the reports regarding the alleged disappearance of 0.08 Bitcoins and called it an 'absolutely false claim'. The police said that 0.03 Bitcoins and three other crypto coins were seized from the account of Robin Khandelwala and were transferred to the Police wallet.

"0.08 Bitcoins along with other three Cryptocurrencies (worth Rs 2,50,438 as per the then rates) were seized from the account of Robin Khandelwala and transferred to Police Wallet in the presence of panchas. It was duly intimated to court," Police said.

The clarification comes after Congress leader Priyank Kharge questioned the 'disappearance' of the cryptos. In a tweet, Chittapur MLA said, "0.8 #Bitcoin was transferred from the accused’s wallet to police wallet for “safekeeping”. Did the police wallet transact? The Blockchain explorer seems to suggest so. 18/1/21 they “secure” the bitcoins & 19/1/21 bitcoins are transferred. Where did they go? #BJPBitcoinScam."

0.8 #Bitcoin was transferred from the accused’s wallet to police wallet for “safe keeping”

Did the police wallet transact? The Blockchain explorer seems to suggest so.

What is a Bitcoin Scam?

The case dates back to 2020 when Srikrishna Ramesh alias Sriki (26) was arrested by the Central Crime Branch of Bengaluru Police under the NDPS (Narcotics Drugs and Psychotropic Substances) Act in a drug-related case. He was accused of procuring drugs using cryptocurrencies and peddling them to clients across the state. His arrest has unwrapped a series of crimes including the hacking of the Karnataka government's e-Procurement site a year ago.

During the further probe, 9 other accused were secured and arrested. During interrogation, Sriki confessed to police about his involvement in the alleged hacking of crypto exchange websites.

"It is stated that neither was any Bitcoins transferred from the account of hacker Srikrishna nor was any Bitcoin lost. It is a fact that for the purpose of investigation of Cryptocurrency, it was felt necessary to open a Bitcoin account," the police said.

The police said that it received the government's permission in December 2020 to open a Bitcoin account. "During the process of identifying and seizure of bitcoins, accused Srikrishna showed a BTC wallet, which contained 31.8 BTC. The wallet password was changed in the presence of cyber experts, Government panchas and the entire procedure was recorded under mahazer and submitted to the court," the police said.

Moreover, the Court's permission was obtained to transfer said BTC to the Police wallet. Upon reaching the wallet shown by Sriki, it had 186.811 Bitcoins, cops said, adding that Cyber experts pined that the account claimed by the accused was a live wallet and he didn't have a private key for this.