In a tweet, the Karnataka BJP brought up the 1984 anti-Sikh riots in India, which was followed after the assassination of Indira Gandhi& asked them to apologise 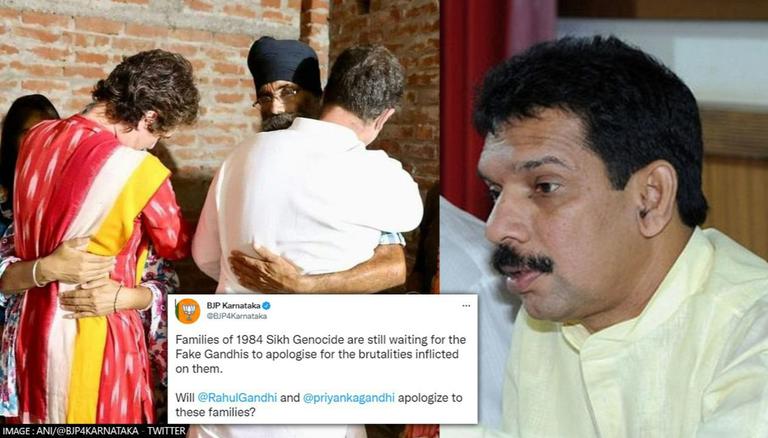 
As the political controversies surrounding the Lakhimpur Kheri incident continues, the BJP and Congress are leaving no stone unturned to sling mud against each other. In yet another political brawl, Karanataka BJP on Friday posted a picture of Congress leaders Rahul Gandhi & Priyanka Gandhi Vadra meeting the family members of the deceased farmers who lost their lives in the Lakhimpur Kheri incident.

In a tweet, the Karnataka BJP brought up the 1984 anti-Sikh riots in India, which was followed after the assassination of Indira Gandhi in which thousands of Sikhs lost their lives across the country. Asking if the Gandhis will apologize for the 1984 massacre, the BJP wrote, “ Families of 1984 Sikh Genocide are still waiting for the Fake Gandhis to apologise for the brutalities inflicted on them. Will Rahul Gandhi and Priyanka Gandhi apologize to these families?”

Families of 1984 Sikh Genocide are still waiting for the Fake Gandhis to apologise for the brutalities inflicted on them.

The BJP shared the tweet along with a picture of the Gandhi siblings consoling the family of the Sikh protestor who lost his life in the Lakhimpur-Kheri incident.

The BJP’s attack on Congress comes after Karnataka Congress President DK Shivakumar lashed out at the saffron party on the ongoing allegations on MoS Ajay Mishra Teni’s son Ashish Misra, of running over his vehicle on the protesting farmers and killing them.

DK Shivakumar, Kanakapura MLA, took a jibe at BJP and appealed to the people to record videos whenever BJP leaders' cars passed through them, alleging that BJP leaders might ‘run over people’ whenever they want to. He did not mince his words and further added that the video recorded by citizens can be used as evidence against such crimes committed by BJP leaders. He further said that the video will be a service to the nation. The video appeal by Shivakumar was a direct attack on MoS Misra and his son’s alleged involvement in the case.

An appeal to the masses: whenever you see a BJP leader’s car pass by, just open your phone camera and make a recording.

You never know when they decide to run their car over people and kill them.

Your video will then become evidence. It will be a great service to the country. pic.twitter.com/9rKit00ZzW

After arresting two people and detaining three others, UP police summoned Ashish Mishra in connection with the case on Thursday, sparking widespread anger. The autopsy report confirmed that the deceased had no gunshot injuries, yet fired shells were recovered from the scene. Under IPC Sections 120B, 147, 148, 149, 279, 302, 304A, and 338, Ashish Mishra and 15-20 other unidentified individuals have been booked. Mishra's current whereabouts are unclear, although UP Leader of the Opposition Akhilesh Yadav claims he has fled to Nepal.

READ | Supreme Court pulls up UP govt for not arresting Ashish Mishra; unsatisfied with probe

Four farmers were brutally mowed down by an SUV in Lakhimpur Kheri while returning from a protest against the Centre's three new farm laws. The demonstration was staged against the visit of UP Deputy Chief Minister Keshav Prasad Maurya on 3 October. Along with the four farmers, it was reported that two BJP workers were also beaten to death by angry protesters.