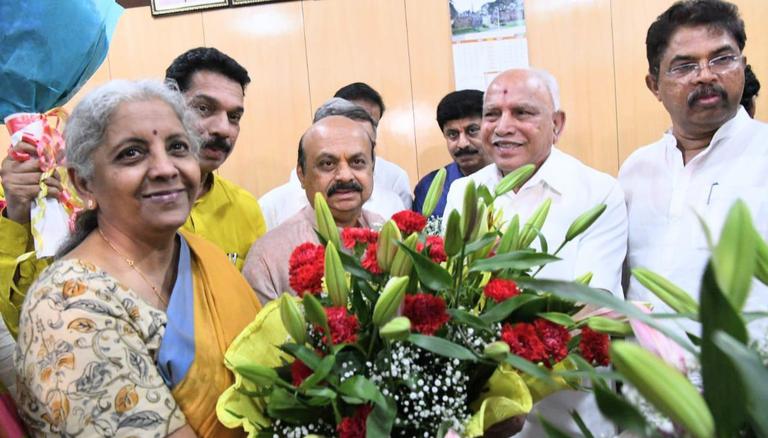 
Union Finance Minister Nirmala Sitharaman on Saturday expressed her gratitude to BJP karyakartas for re-electing her to the Rajya Sabha from Karnataka. Praising the party's coordinated efforts, she thanked the party workers as well as Chief Minister Basavaraj Bommai for ensuring her victory. Sithtaman has been a member of the Rajya Sabha since 2014.

Thanking the party for her re-election, she said, "I am humbled. The people of Karnataka have given me the opportunity to serve them again. Every party worker has extended their full-fledged support. It was everyone's effort. I one again thank Chief Minister Bommai and every BJP karyakarta for their support."

Thanks for the good wishes and greetings expressed on my election to the #RajyaSabha.
Grateful for all kind words & blessings.

Gratitude to @BJP4India @BJP4Karnataka and people of Karnataka.
My thanks to @PMOIndia @narendramodi @JPNadda ji, @BSBommai avaru & @nalinkateel avaru

Heartiest congratulations to FM @nsitharaman, @Jaggesh2 & @ Lehar Singh for being elected as Rajyasabha Members from Karnataka.

FM Sithraman, along with actor-politician Jaggesh and outgoing MLC Lehar Singh Siroya were elected to the Upper House from the southern state in Friday's elections. While the BJP bagged three seats from Karanataka, Congress's Jairam Ramesh scored one seat. The Janata Dal-Secular (JDS) failed to win a single seat in its home state, amid a tussle with Congress over cross-voting. Congress' second candidate Mansoor Ali Khan and JDS' D Kupendra Reddy suffered losses in the race to Rajya Sabha.

In the 224-member Karnataka assembly, the BJP with 121 MLAs and Congress with 70 members were, since the beginning, sure to win two seats and one seat respectively. The JDS. with just 32 seats had no hope of winning but forced a contest for the fourth seat. None of the three parties had the required votes to win the fourth seat, which is why they were reaching out to one another seeking support.

Outraged by the development, JDS supremo HD Kumaraswamy lashed out at Congress for "revealing its true face" and dubbed the party 'B' team of the BJP.