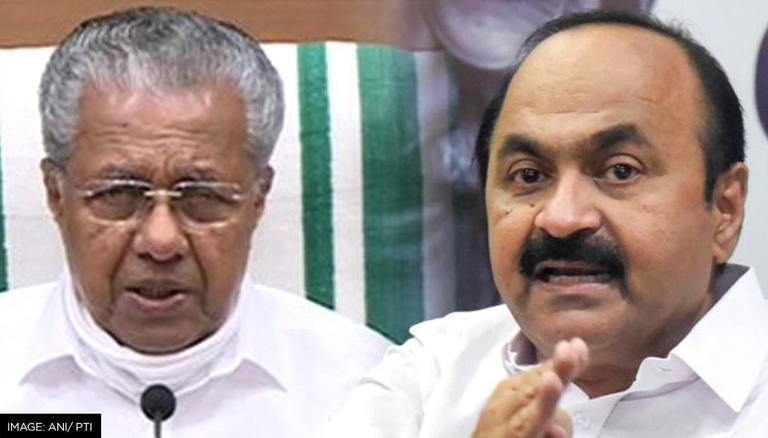 
On Tuesday, Leader of the Opposition in Kerala Assembly VD Satheesan alleged attacks on Congress party offices in the state by the Communist Party of India Marxist. He said that Kerala CM Pinarayi Vijayan has proved to be a "bigger dictator than Hitler, Narendra Modi and Yogi Adityanath." Satheesan's remarks come after Youth Congress workers, who raised slogans against Vijayan onboard an aeroplane, were booked under the charges of attempt to murder.

"A case for attempting to murder has been registered against the Youth Congress workers for simply raising slogans in protest. On the flight yesterday, they just raised slogans and said 'protest, protest'. With this Kerala chief minister Pinarayi Vijayan is proving to be a bigger dictator than Hitler, Narendra Modi and Yogi Adityanath,'' said Satheesan, reported ANI.

The Kerala LoP questioned as to why no case was registered against LDF convenor EP Jayarajan, who allegedly pushed the Youth Congress workers inside the aircraft which has been captured on camera. He asked, "On what basis was the case for attempted murder filed? Police have not registered a case against EP Jayarajan, LDF Convenor who attacked the protestors inside the flight. There was no planning from Congress here. The workers protested against CM without the knowledge of the leaders," said Satheesan.

On Monday, Youth Congress state vice-president and former MLA KS Sabarinathan released a three-second video on his social media showing a scuffle between two Congress workers and a CPI(M) leader inside an aircraft in which the Kerala CM was travelling.

He claimed that the CPI(M) leader and LDF convenor EP Jayarajan attacked the two Congress workers. This came in relation to the protests demanding the resignation of Kerala CM Vijayan after allegations levelled by Swapna Suresh in the gold smuggling case.

The Congress workers who posed as passengers managed to enter a flight in which Kerala CM Vijayan was travelling from Kannur to Thiruvananthapuram on Monday. In the visuals, the Congress workers were seen wearing black shirts and raised slogans against Pinarayi Vijayan inside the flight, demanding his resignation. Soon after, a senior CPI(M) leader and LDF convenor EP Jayarajan came forward and pushed the protesting Youth Congress workers.

#LIVE: Video emerges of scuffle aboard a plane landing in Thiruvananthapuram; Youth Congress workers allegedly protested against Kerala CM Vijayan who was onboard, and were seen being manhandled allegedly by a LDF leader https://t.co/FfM1hKV7TH pic.twitter.com/5egt9ta6Gp

After the flight landed, the duo staged a sit-in protest on the runway. Republic TV has learnt from sources that both the Congress workers have been detained and are in Central Industrial Security Force (CISF) custody.