On Tuesday, RJD supremo Lalu Yadav launched a frontal attack on Bihar CM Nitish Kumar ahead of the upcoming by-elections in Kusheshwar Asthan and Tarapur. 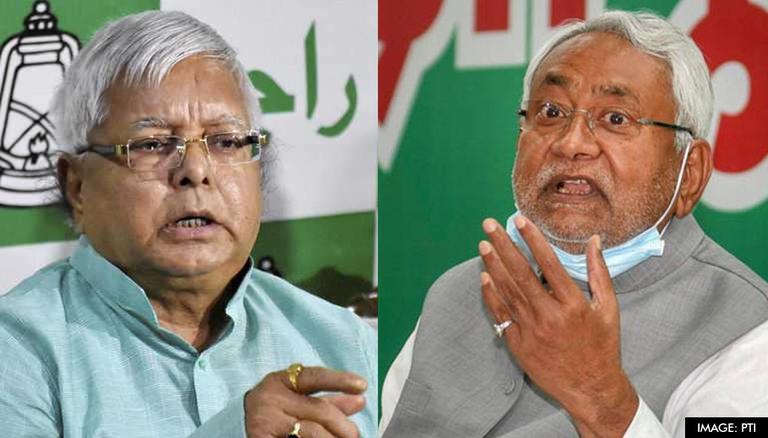 
RJD supremo Lalu Prasad Yadav launched a frontal attack on Bihar CM Nitish Kumar ahead of the upcoming by-elections in Kusheshwar Asthan and Tarapur. Speaking to the media on Tuesday, Yadav revealed that he would campaign for RJD in both these constituencies on October 27. Predicting that his party will win both seats by a handsome margin, he opined that the ruling BJP-JD(U) coalition is losing ground rapidly.

The former Bihar CM remarked, "I didn't expect Tejashwi Yadav to handle the situation very well. I have come now, but Tejashwi is overseeing the campaign. In our absence, every worker of our party ensured that RJD gets the highest number of seats in the Assembly". This remark assumes significance at a time when his elder son Tej Pratap Yadav has threatened to completely sever his association with RJD.

Endorsing his son's view that the collapse of the Nitish Kumar-led government is a possibility, Lalu Yadav added, "Whatever Tejashwi is saying is correct. Both seats are very important. Definitely, there will be panic at their end. And we will form the government."

Taunting Nitish Kumar, he quipped, "He is Prime Minister material. They would chant slogans, "How should a Prime Minister be like? He should be like Nitish". He has such arrogance and greed."

Weighing in on Congress' decision to walk out of the Mahagatbandhan, "It is natural that we have an alliance with like-minded parties and secular forces. At the state level, we forged an alliance with Congress, the Left and smaller parties. We feel that it is necessary to have an alliance in the country. There should be an alternative. People of the country want an alternative. Congress should play a big role in this. Who has defended or helped Congress more than us?"

The differences between RJD and Congress came to the fore after ex-JNUSU president Kanhaiya Kumar switched allegiance to the Sonia Gandhi-led party. RJD has been at odds with Kanhaiya Kumar over his decision to contest from Begusarai in the 2019 General election despite the former fielding a strong candidate in Tanveer Hassan. Ultimately, Union Minister Giriraj Singh was re-elected from the constituency whereas Hassan and Kumar stood second and third respectively.

The Assembly seats of Kusheshwar Asthan and Tarapur will go to the polls on October 30 whereas the counting of votes will take place on November 2. After RJD refused to let Congress contest from Kusheshwar Asthan, the latter fielded its candidates on both seats going to the polls. Meanwhile, AICC Bihar in-charge Bhakt Charan Das hinted that RJD had struck a deal with BJP and announced that Congress will go solo in the 2024 Lok Sabha polls.

WE RECOMMEND
Amid feud with Congress, Lalu Prasad Yadav to campaign for RJD in Bihar by-polls
Amid rift, RJD cites bond between Sonia & Lalu; says 'he stood by her when no one did'
RJD's Tejashwi accuses Centre of step-motherly treatment to Jharkhand in fund disbursement
RJD's Manoj Jha weighs in on Congress' future in 2024 polls, unsure about Rahul as PM face
Tejashwi Yadav slams Bihar CM, says bypolls a result of 'poor health facilities' in state