ACCESSED: List Of MPs Who Didn't Vote On CAB In The Rajya Sabha

As the Rajya Sabha passed CAB with a 125-105 majority on Wed, there were nearly 16 MPs who walked out or did not vote in the house as they were absent.

As the Rajya Sabha passed the Citizenship (Amendment) Bill, 2019 with a 125-105 votes majority on Wednesday, there were around 16 members who did not vote in the House. This included two from BJP MPs, one from INC MP, three from Shiv Sena MPs and two from NCP, IND, and BSP each. Apart from them, one MP each from the AITC, SP, JD(S) and TRS parties did not attend the CAB proceedings.

While some did not attend the session at all, a few MPs walked out of the house before the voting began. The three Shiv Sena MPs including Sanjay Raut did stage a walkout from the Upper House of the Parliament. After walking out, Sanjay Raut told the media, "Yes, Shiv Sena has boycotted the voting". Have a look at the list of MPs who did not attend Rajya Sabha proceedings.

List of MPs who did not vote in Rajya Sabha 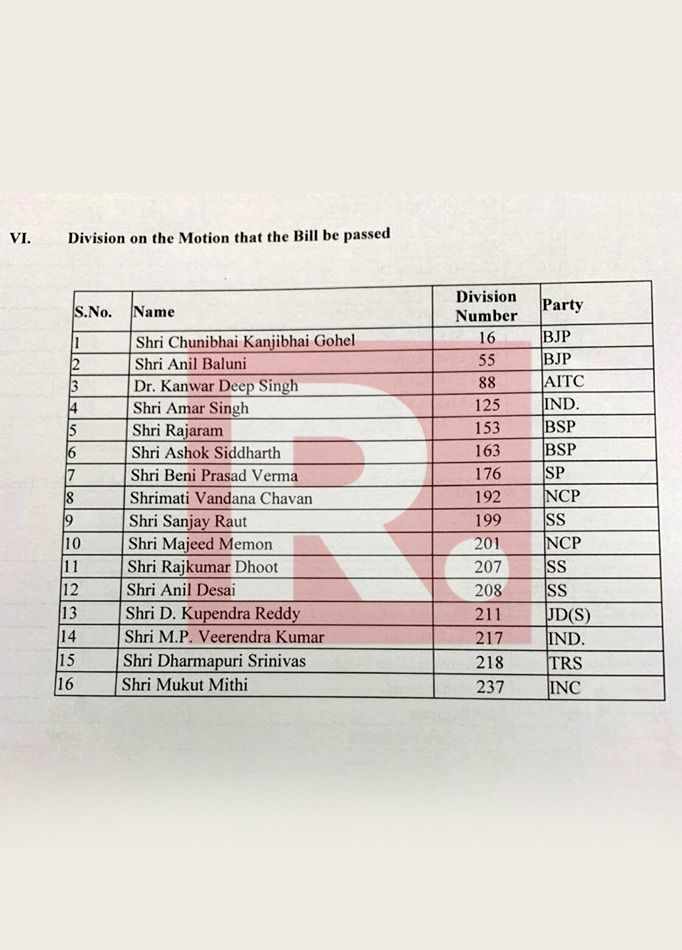 On Wednesday, the Rajya Sabha passed the Citizenship Amendment Bill, 2019 (CAB) by a majority of 125-105 votes. This comes after more than 40 MPs including P Chidambaram, Kapil Sibal, Ghulam Nabi Azad, Derek O'Brien, Sanjay Singh, Sanjay Raut, and Vaiko put forth their arguments either in favour or against the CAB. Some members including the Shiv Sena MPs walked out before the commencement of the voting process. Earlier on Monday, the Lower House of Parliament cleared the legislation with a landslide margin. Once the President gives his assent to the Bill, it will immediately come into operation.

Speaking to the media after walking out of the Rajya Sabha, Raut said, "We wanted a few answers to our questions. But I and my party thought that if we are not getting any answers properly then there is no point in opposing or supporting the bill." Further, speaking about vote bank politics, he said, "The vote bank politics should not be played. It is not correct. Do not attempt to create a Hindu-Muslim divide again. Also, there is nothing in this Bill for Tamil Hindus of Sri Lanka."

The Bill seeks to provide citizenship to the minority communities namely Hindus, Sikhs, Buddhists, Jains, Parsis and Christians from Afghanistan, Bangladesh and Pakistan. This will be applicable to the members of these communities having arrived in India on or before December 31, 2014. Moreover, they will not be considered as illegal migrants.

Additionally, the mandatory residence period for naturalised citizenship for these communities would be reduced to 5 years. Several parties in the North East such as the All Assam Students’ Union (AASU) have been vehemently opposed to this Bill. To ameliorate their concerns, the Centre has exempted a major part of the North East from the ambit of the CAB. The opposition contends that the Bill discriminates on the basis of religion, which might go against Article 14, which guarantees the right to equality.