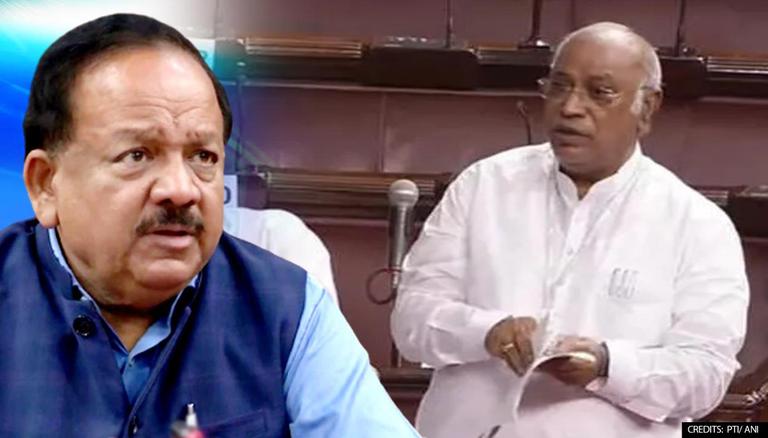 
Leader of Opposition in Rajya Sabha Mallikarjun Kharge, on Tuesday, attacked the Centre and said that the former Union Health Minister Harsh Vardhan was made a scapegoat for the mismanagement of COVID-19. The Congress leader slammed Prime Minister Narendra Modi for his disappointing promises and putting the blame on the former Health Minister. He further criticised the Centre for imposing lockdown overnight without giving prior notice.

'He made the health minister a scapegoat': Kharge on PM Modi

Speaking at the Rajya Sabha on July 20, Mallikarjun Kharge said "Prime Minister Modi appealed to people to clang utensils, light up candles. People trusted him and did all of it. But, he did not fulfil his promise rather disappointed them. Instead of taking its blame, he made the health minister a scapegoat." He slammed the Modi Government for violating COVID-19 norms during election times while urging the common man to follow safety measures, "Government asked people to wear masks and maintain social distancing. But what were they doing during the elections in different states? You are breaking your own rules. You should be given credit for flouting COVID norms," the Congress leader said.

Further attacking the Government on its lockdown imposition, he said "Lockdown was announced overnight, just like demonetisation. The government did not prepare for it. There were no trains for people to go back home. The livelihood of people was impacted. Government should be held accountable,".

The opposition leader further lauded the efforts of doctors, healthcare workers and civil society for their contribution in the fight against COVID-19. "I pay tribute to COVID warriors including doctors and paramedics. I salute people who helped others by running 'oxygen langer' in Delhi during the second wave of COVID-19. I also want to salute plasma donors, who came out in support," added Kharge.

Earlier on Sunday, Mallikarjun Kharge had said that Congress proposed to discuss various issues like inflation, poverty and the COVID-19 crisis in the house in front of Venkaiah Naidu, ahead of the Monsoon Session of the Parliament. This meeting was aimed at planning out strategies to corner the Bharatiya Janata Party (BJP) in both houses. The Monsoon Session, which began on Monday, will conclude on August 13.