Weighing in on the Punjab government's decision to sell COVAXIN to private hospitals, BSP supremo Mayawati dubbed it as "inhuman, condemnable and unfortunate". 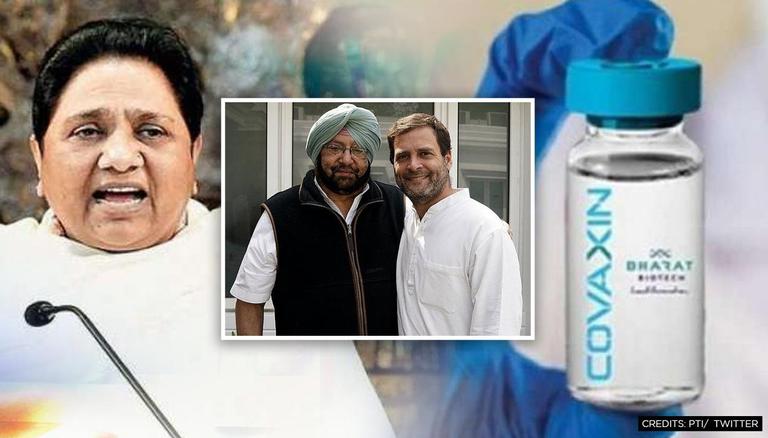 
Weighing in on the Punjab government's decision to sell COVAXIN to private hospitals at a premium, BSP supremo Mayawati on Saturday dubbed it as "inhuman, condemnable and unfortunate". She lamented that it was seeking to earn profits especially at a time when the country is grappling with the COVID-19 pandemic. Moreover, Mayawati added, "It is clear from the media expose of Punjab government's wrong step that the Congress leadership's stance regarding COVID-19 vaccine was not serious and more of a drama". On behalf of her party, the former Uttar Pradesh CM sought the Centre's intervention in this matter.

Out of the 1.14 lakh COVAXIN doses procured at Rs.420 per dose, the state government sold some of the stock to private hospitals at Rs.1060 per dose. While it had acquired these doses for people aged between 18 and 44 having co-morbidities, for construction workers and families of healthcare workers in government vaccination centres, the private hospitals are reportedly administering them to all adults at Rs1,560 each. Speaking to the media on Thursday, SAD chief Sukhbir Singh Badal claimed that vaccines were being diverted to private players at hefty margins to create an artificial shortage.

READ | Sidhu wants to be Punjab CM from any party; Captain Amarinder row a diversion: Harsimrat

Similarly, Union Minister Prakash Javadekar too lashed out at the Punjab government advised Rahul Gandhi to concentrate on the situation in Punjab rather than giving lectures to others. Highlighting that the Centre has provided nearly 22 crore doses to states free of cost, he reminded that it was state governments that had sought decentralization of vaccine procurement. Taking a dig at the internal turmoil in the Punjab Congress unit, Javadekar claimed that the state government was failing in vaccine management.

After the backlash, the Punjab government issued a fresh order on May 4 stating, "The order of providing one-time limited vaccine doses to 18-44 years age group population through private hospitals has not been taken in the right spirit and is hereby withdrawn. Further, it has been decided that private hospitals should return forthwith all the vaccine doses available with them. The doses which they have utilised as of date should also be returned back, once they get direct supplies from the manufacturers."