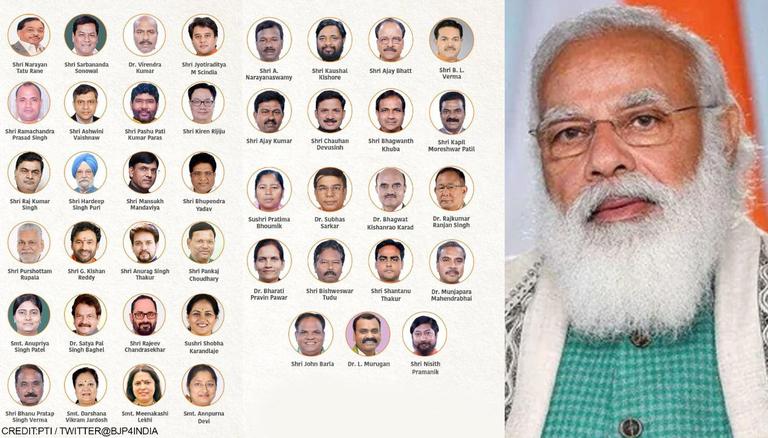 
The most talked-about and much-awaited Union Cabinet expansion led by Prime Minister Narendra Modi, culminated on Wednesday, July 7 at Rashtrapati Bhawan. The oath swearing which began at 6 PM on Wednesday after the national anthem saw several new faces being inducted into the cabinet. Apart from PM Modi, the ceremony was graced by Lok Sabha speaker Om Birla, First Lady Savita Devi Kovind among others, as President Ram Nath Kovind was facilitating the swearing-in ceremony.  Several leaders who are already serving as Union Ministers were also a part of the swearing-in ceremony. The ceremony was conducted in compliance with the COVID-19 protocols.

READ | From Harsh Vardhan to Pokhriyal, check out major resignations ahead of cabinet reshuffle

Dr Virendra Kumar, Lok Sabha MP from Trikamgarh, was the third to take oath as a minister in the new cabinet. Followed by Jyotiraditya Scindia, former Congress leader who switched to BJP last year, due to which BJP came back to power in Madhya Pradesh.

Next in line was Rajya Sabha MP from Bihar and JD(U) National President, Ramchandra Prasad Singh, followed by Ashwini Vaishnaw, Rajya Sabha MP from Odisha. Vaishnaw is an IAS officer who has also done his MBA from the USA and MTech from IIT Kanpur. He has also held leadership roles in major global companies such as General Electric and Siemens. Pashupati Kumar Paras, brother and confidante of Late Union Minister Ram Vilas Paswan and the estranged uncle of LJP President Chirag Paswan. He is a Lok Sabha MP from Hajipur in Bihar.

READ | Ahead of polls, seven ministers from Uttar Pradesh to be inducted in PM Modi's cabinet

Others who took oath were: