The senior BJP leader also alleged that the Opposition is trying to disrupt the proceedings of the House on the basis of 'fake and fabricated tales'. 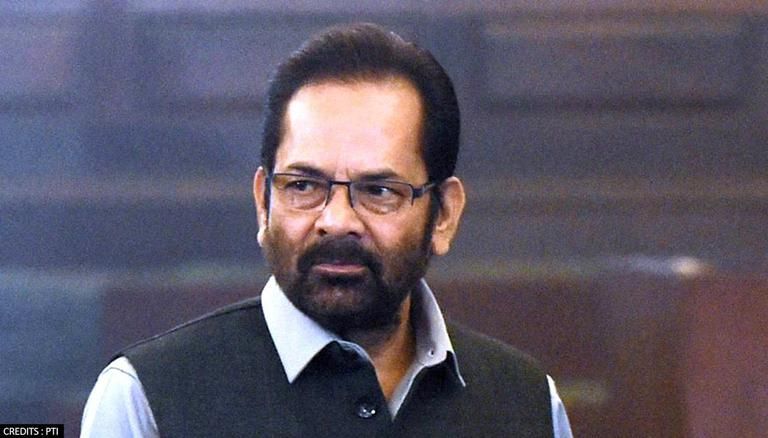 
Hitting out at opposition parties for disrupting Parliamentary proceedings, Union Minority Affairs Minister, Mukhtar Abbas Naqvi on Monday alleged that the Opposition is trying to 'hijack' the proceedings of Parliament on the basis of 'fake' and 'fabricated tales.'

"May God give the Opposition wisdom": Mukhtar Abbas Naqvi

Slamming the opposition camps, the Minority Affairs Minister said, "There has been no rush in passing bills. Discussions have taken place in the Business Advisory Committee accordingly. Bills have been circulated. Circulars are being issued 48 hours in advance and are delivered to all the members, which comes after writing in the business. But the problem is if you (Opposition party members) stay in the 'well' instead of discussing or participating in the debate, may God give you wisdom."

"We want the Opposition to debate or discuss the bills or any issue they want. But if you are in the well, then how will the bills get passed?" the Minister asked while censuring the Opposition. "The attempt to hijack the proceedings of Parliament is wrong. You should abide by the complete system of Parliament and participate in the debate and discussions," the Minority Affairs Minister added.

The senior BJP leader also alleged that the Opposition is trying to disrupt the proceedings of the House on the basis of 'fake and fabricated tales'.

Responding to TMC Rajya Sabha MP, Santanu Sen's suspension for the remaining period of the Monsoon session, Minister Naqvi said, "The Chairman will take his decision. Information and Technology Minister, Ashwini Vaishnaw was providing a statement on an issue that created a lot of ruckus in the parliament. There was an opportunity to raise questions. Instead, the TMC MP tore the papers. It is clear that the issue they have is far away from logic and facts. They are simply trying to disrupt the proceedings of the House on the basis of fake and fabricated tales."

Notably, on July 23, TMC MP Santanu Sen had snatched the statement on the Pegasus issue from the Minister of Communications and Electronics & Information Technology of India, Ashwini Vaishnaw in the Rajya Sabha and tore it into pieces. Following the act, Rajya Sabha Chairman M Venkaiah Naidu suspended the TMC MP Santanu Sen for the remaining period of the ongoing Monsoon session.

It may be noted here that, since the commencement of the Monsoon session of the Parliament on July 19, both the houses - Lok Sabha and Rajya Sabha, have failed in accomplishing any vital business, except the passage of some bills amid continued protests from opposition parties over the Pegasus and farmers' issues. The Opposition and the ruling saffron party are in a logjam with the former seeking a debate over the Pegasus issue.