'Take Some Gyan...': Owaisi Chides Uddhav Thackeray On Fiery 'What Is Secular?' Retort

Chiding newly sworn-in Maharashtra CM Uddhav Thackeray, AIMIM chief Asaduddin Owaisi, on Friday, tweeted that the question was not philosophical. He pointed out that Thackeray cut a sorry face by asking explanation for his own government's common minimum programme (CMP). Answering Thackeray's rhetorical question, Owaisi clarified that Secular meant - 'No Hindu Rashtra and no discrimination based on faiths'. 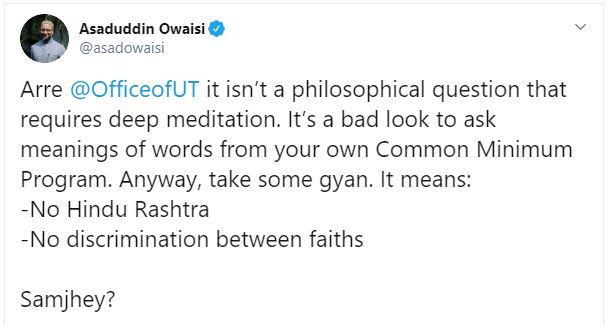 Uddhav asks 'What is secular?'

Earlier on Thursday, after chairing his maiden cabinet meeting after taking oath as Maharashtra's CM, Uddhav Thackeray was stumped when queried about the 'secular' CMP.  When queried about the preamble of the CMP which highlights that the alliance will uphold secularism, Thackeray shot back - "What is the meaning of secular? You tell me. It is there in the Constitution," referencing the Constitution's preamble.

Incidentally, Shiv Sena from its inception till date has been a strong advocate of Hindutva - which politically sets it apart from the 'secular' Congress. It has been very vocal on issues like Ayodhya Ram Mandir, Bharat Ratna for Savarkar and Maratha pride.  The Shiv Sena chief, who is the first member of the Thackeray clan to hold a Chief ministerial position took oath at 6:40 PM at Shivaji Park after being unanimously selected as the Maha Vikas Aghadi leader.

The Maha Vikas Aghadi released its 'secular' Common Minimum Programme which in its preamble declares that the alliance will take a joint view on matters which have consequences on 'secular fabric of the nation' indicating towards a toned-down right-wing Shiv Sena. While the CMP found no mention of Aarey forest conservation, Bharat Ratna for Savarkar or a caste-based reservation to mention a few issues, it included several subsections like - Farmers, Unemployment, Health, Industry, Social justice, Women, Education, Urban Development, Tourism. The CMP mainly features an immediate farm loan waiver, 80% reservation for local youth and the two Coordination committees.

The Maha Vikas Aghadi which staked a claim on Tuesday has been given a deadline till December 3 to prove their numbers. All MLAs were sworn-in on Wednesday in a special session, including Devendra Fadnavis who stepped down as CM after Ajit Pawar rescinded his support to the BJP-led government. The BJP-Sena which fell out squabbling over a 50-50 power-sharing and shared CM post bagged 161 seats (BJP- 105, Shiv Sena-56), while the Maha Aghadi won 98 seats (NCP -54, Congress).