Owaisi Defends Don-turned-neta Ateeq Ahmad's Entry Into AIMIM, Confident Ahead Of UP Polls

Mafia don-turned-politician Ateeq Ahmad, his wife Shaista Parveen and his lawyer joined AIMIM on Tuesday in a crucial development ahead of the UP polls. 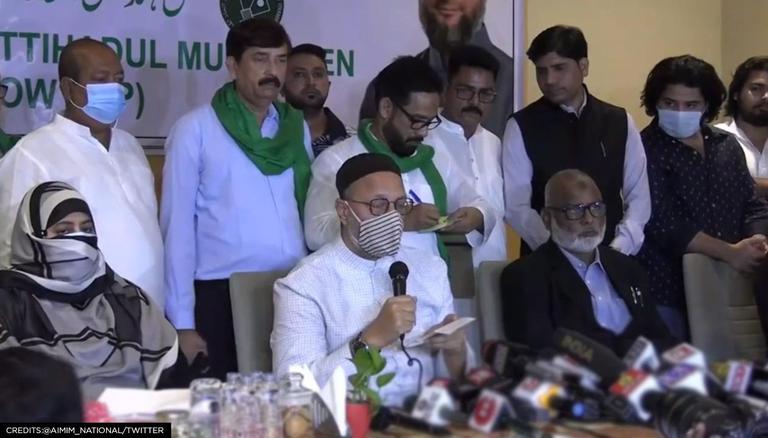 
Mafia don-turned-politician Ateeq Ahmad, his wife Shaista Parveen and his lawyer joined AIMIM on Tuesday in a key development ahead of the UP polls. Addressing a press conference in Ayodhya, AIMIM supremo Asaduddin Owaisi defended Ahmad's entry citing that several BJP lawmakers also faced serious criminal charges. He added, "If Ateeq Ahmad delivered a provocative speech before the Muzaffarnagar riots or made a speech in Gorakhpur which led to trouble and he belonging to the community which is in power, then the cases against him would have been withdrawn. This is the reality. As per Indian law, he is yet to be convicted in any case".

Ahmad served as an MLA from the Allahabad West constituency 5 times in a row from 1989 to 2004. He was also elected to the Lok Sabha in the 2004 General Election on a Samajwadi Party ticket. Facing a huge number of criminal cases pertaining to offences such as murder, abduction, extortion and fraud, he is currently lodged in a Gujarat jail.

Reading out her husband's written statement on this occasion, Parveen stated, "I have listened to many speeches of Barrister Asaduddin Owaisi and his Parliamentary debates. I am influenced by his capability and farsightedness. I am joining AIMIM taking into account Owaisi's love for the country and faith in the Constitution, his love towards the minorities and Dalits and his mission."

Asserting that Muslims should have an independent voice in Uttar Pradesh, the Hyderabad MP reiterated that his party intends to contest 100 seats in the upcoming UP Assembly election. Responding to the reluctance of the Samajwadi Party and Bahujan Samaj Party to tie up with AIMIM, he contended that they had done precious little for the empowerment of Muslims. Moreover, he exuded confidence that his party shall emerge victorious in the UP polls.

READ | Asaduddin Owaisi reacts as India's envoy meets Taliban, asks if they will be on UAPA list

For the Uttar Pradesh Assembly election, AIMIM has joined the 'Bhagidari Sankalp Morcha' which is being led by Om Prakash Rajbhar. It comprises 9 other parties including the Suheldev Bhartiya Samaj Party, the Apna Dal faction of Krishna Patel, Rashtroday Party, Rashtriya Bhagidari Party and Janta Kranti Party. A Minister in the Yogi Adityanath-led Cabinet until 2019, Rajbhar has been a fierce critic of the state government and the Centre after parting ways with the saffron party.

Recently, there has been friction between AIMIM and SBSP with the latter keeping the door open for an alliance with BJP. However, UP AIMIM president Shaukat Ali strongly disapproved of this stance. While clarifying that his party is still an alliance partner of SBSP, he stressed that AIMIM shall never join hands with the saffron party.