Pointing to legal marriage age in countries like UK, Canada, US and New Zealand, Asaduddin Owaisi said that the Modi government acts like a 'Mohalla Uncle'. 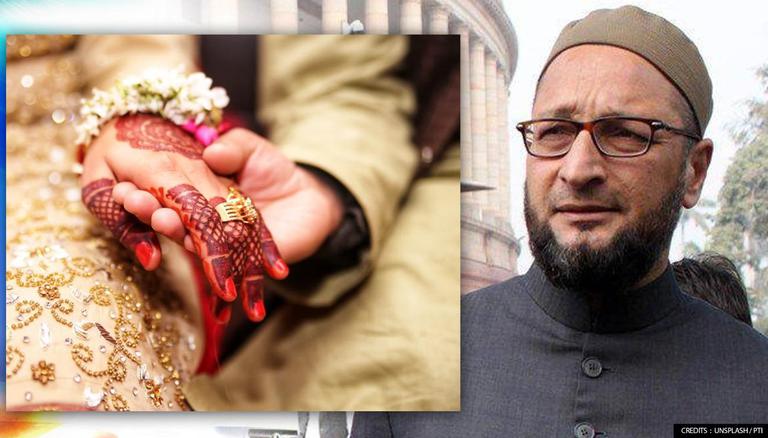 
AIMIM chief Asaduddin Owaisi slammed the Narendra Modi government after the union cabinet cleared the proposal for raising the legal age of marriage for women to 21 years, bringing it at par with that of men. The Hyderabad MP said that both men and women should be allowed to get married at 18 as they are lawfully adults by then. "Modi government has decided to increase the age of marriage for women to 21. This is typical paternalism that we have come to expect from the government. 18-year-old men and women can sign contracts, start businesses, choose Prime Ministers and elect MPs & MLAs but not marry?" Owaisi said.

Modi govt has decided to increase the age of marriage for women to 21. This is typical paternalism that we have come to expect from the govt. 18 year old men & women can sign contracts, start businesses, choose Prime Ministers & elect MPs & MLAs but not marry? 1/n

Calling the government's move ridiculous, the AIMIM chief, in a series of tweets, questioned if 18- year olds can consent to sexual relationships and live-in partnerships then why cannot choose their life partners.

Men & women are treated as adults at 18 for most critical things. Why is marriage any different? The legal age is not really a criteria; the essential goal must be to ensure education, economic progress & human development 9/n

"More than legal age of marriage, it is improved education and better economic prospects for youngsters, that impacts when they marry. 45% of poorest households had child marriages; only 10% of wealthiest households did so," Owaisi said.

He further stated that the Modi government should focus on increasing economic opportunities for women. The Hyderabad MP claimed that India is the only country where women's participation in the workforce is decreasing. "If fell to 16% in 2020 from 26% in 2005."

"It’s essential to improve their educational outcomes to ensure autonomous decision-making. What has the govt done to improve education for girls? 79% of ₹446.72 crores Beti Bachao Beti Padhao budget was spent on adverts. You want us to believe that this govt has sincere intentions?" he asked.

Furthermore, pointing to legal marriage age in countries such as the UK, Canada, the US, New Zealand, Owaisi said that the Modi government acts like a "Mohalla Uncle" deciding what we eat, what god we worship and who/when we marry, etc. "Ironically, govt proposes 18 as the age of consent in Data Bill. If 18-year olds can choose how their data is used, why can’t they choose their life partners?"

He said that government should stop thinking of young people as children. "This is also why I have proposed a private members' bill that will allow 20-year-olds to become MPs and MLAs," the AIMIM chief said.

The Union Cabinet on Thursday cleared a proposal to increase the legal age of marriage for women to 21. Current, it is 18. The bill in this regard is likely to be tabled in the ongoing Winter session of Parliament to amend the prohibition of the Child Marriage Act, 2006.