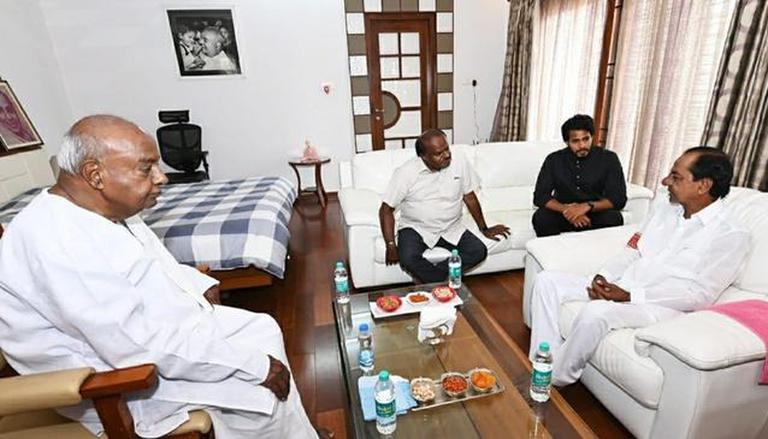 
In a key development, former Karnataka Chief Minister HD Kumaraswamy ruled out the possibility of his father HD Deve Gowda contesting the upcoming Presidential election. The 89-year-old politician, who served as the Prime Minister from June 1996 to April 1997, is presently a member of the Rajya Sabha. Speaking to the media on Friday, Kumaraswamy clarified that Deve Gowda's only desire is that JDS should form a government on its own in Karnataka. The former attended a meeting of opposition leaders called by TMC supremo Mamata Banerjee on June 15 to discuss the election for the country's highest constitutional post.

“No, there is no question of Deve Gowda’s name in the race (for Presidency), he has no interest in it. His desire is to see JD(S) forming an independent government in Karnataka during his lifetime, that’s his aim," Kumaraswamy was quoted as saying by PTI. Mentioning that the previous meeting could not yield any outcome, he hinted that another meeting might be held on June 20 to decide the Presidential candidate.

As the term of President Ram Nath Kovind is ending on July 24, an election to fill this impending vacancy will be held on July 18. The President will be elected by the Electoral College consisting of elected members of both Houses of Parliament and the Legislative Assemblies through a secret ballot. However, the nominated MPs and MLCs of various states are not eligible to participate in this election. The total value of the votes of electors is 10,86,431. While the last date for filing nomination papers is June 29, the counting of votes shall take place on July 21.

So far, both the ruling coalition as well as the opposition are yet to finalise their candidate for the Presidential election. To begin with, BJP deputed its president JP Nadda and Defence Minister Rajnath Singh to interact with other political parties to explore the possibility of a consensus candidate. Moreover, it formed a 14-member team management team headed by Union Minister Gajendra Shekhawat to ensure a smooth election process and ensure the victory of its candidate. As far as the opposition is concerned, NCP supremo Sharad Pawar and NC president Farooq Abdullah have refused to be the presidential candidate.