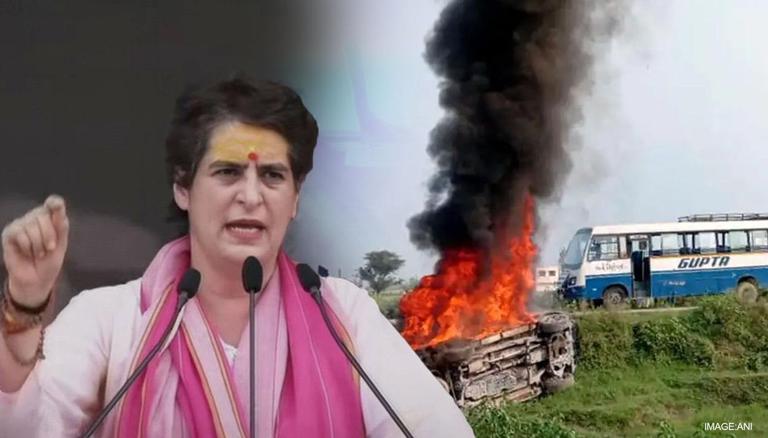 
On Sunday, Congress' Priyanka Gandhi Vadra accused the Central government of 'shielding' Union Minister Ajay Mishra and his son Ashish Mishra in the Lakhimpur violence. The violence that broke out in Lakhimpur after a car, allegedly driven by Ashish Mishra, mowed down the protesting farmers, leading to the death of 8 including four farmers. Arrested by the Uttar Pradesh SIT in the Lakhimpur-Kheri violence incident on Saturday, Ashish Mishra has been sent to judicial remand till October 11.

"Last week, the son of Union MoS (Home) mowed down 6 farmers with his vehicle. Families of all the victims said they want justice but all of you have seen that the Govt is shielding the minister & his son,"  Priyanka Gandhi said, addressing the crowd at the 'Kisan Nyay' rally in Varanasi.

Priyanka Gandhi also used the platform to highlight the BJP administrations' apathy both at the Centre and the state toward the farmers. The Congress General Secretary said, "PM Modi called the farmers terrorist while CM Yogi Adityanth called them hooligans,"  and added, "The same minister (Ajay Kumar Mishra) said that he would make the protesting farmers fall in line within 2 minutes."

READ | BJP leader lashes out at Tikait's 'reaction to action' remark, asks 'are we Taliban?'

Priyanka Gandhi, referring to the summons sent to Ashish Mishra to appear before the Uttar Pradesh SIT prior to his arrest, said, "They are sending an invitation to the house of the accused to come and talk to us. In any other country or even in the history of our country, have you ever seen that a person who killed 6 people, being sent an invitation to come and talk?"

The Congress General Secretary also attacked PM Modi for coming to Uttar Pradesh, and not going to meet the families affected by the Lakhimpur violence. Priyanka Gandhi said, "PM came to Lucknow to see the performance of 'Uttam Pradesh' & Azaadi Ka Amrit Mahotsav, but couldn't go to Lakhimpur Kheri to share the grief of the victim families."

Meanwhile, earlier in the day, the Congress party had tweeted that it has sought an appointment with President Ram Nath Kovind for a 7-member party delegation led by Rahul Gandhi to present a detailed memorandum on the facts of the Lakhimpur Kheri incident. However, minutes later, the tweet was deleted by the party.