Amid a bickering political crisis in Rajasthan, BJP leader and MP Rajyavardhan Singh Rathore hit out at Congress for blaming 'external factors'. 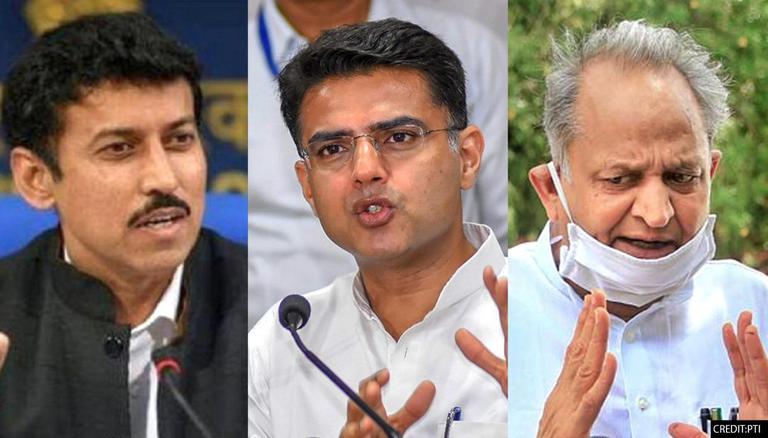 
Amid a bickering political crisis in Rajasthan, BJP leader and MP Rajyavardhan Singh Rathore has hit out at the Congress for blaming the 'external factors' for the crisis. RS Rathore asserted that there are internal conflicts in Rajasthan. Further attacking state Chief Minister Ashok Gehlot, he added that he promises positions for all leaders in the state government. However, Rathore maintained that problem arises during the time when leaders claim the position. The BJP leader claimed that the above reasons are why Gehlot keeps postponing meetings.

There are internal conflicts in Rajasthan. They blame external factors for it. Gehlot has promised everyone different positions in state govt. Problem arises when it's time for them to claim these positions. That's why he keeps postponing meeting & people suffer: RS Rathore, BJP pic.twitter.com/i4l2QBj3O9

'People are still deprived of their needs': RS Rathore

The BJP parliamentarian further criticised the grand old party and said that even as half of their tenure is over, people still remain deprived of their needs. He suggested that Congress should resolve conflicts within themselves which in turn will be beneficial for the people of Rajasthan. Citing Punjab and Rajasthan, he further added that other leaders start making their moves when the central leadership of a party weakens.

Around half of Rajasthan govt's tenure is over and people are still deprived of their needs. If they resolve their conflicts, it'll be beneficial for people. When central leadership weakens, other leaders start making their own decision, like Punjab & Rajasthan: RS Rathore, BJP pic.twitter.com/jkAY3W6eGL

The rumblings in the Rajasthan Congress come over the "delay" in meeting the demands made by the Sachin Pilot faction last year. On a possible cabinet expansion in the state, the senior MLA said nine cabinet births are vacant and 25 legislators are eyeing the posts. In addition, Sachin Pilot is also scheduled to meet Priyanka Gandhi. Sources have also stated that Congress high command including Sonia Gandhi has also intervened in the matter and taken action to resolve the issue. The Rajasthan crisis sparked again after Jitin Prasad joined the BJP and rumours of Pilot following the same path started surfacing. However, Sachin Pilot clarified that he is not going to join BJP as soon as reports started coming out.