A Congress MLA from Rajasthan has on Thursday written to Chief Minister Ashok Gehlot requesting him to open liquor shops while making a fake and bizarre claim. In his letter to the CM, MLA from Sangod, Bharat Singh Kundanpur claimed that alcohol can kill viruses present in the throat. This comes despite the Central government's and WHO's have repeatedly busted myths surrounding the same. The MLA has further claimed that black marketing has begun due to the unavailability of alcohol.

He asked: "If washing hands with alcohol can kill the virus on our hands, why cannot drinking alcohol kill virus in our throat?"

Here is his full letter: 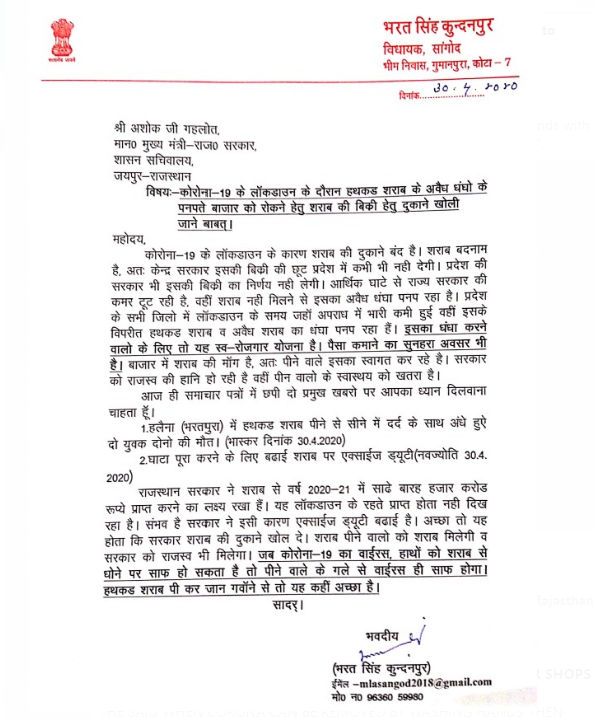 READ | Rising COVID-19 cases in Rajasthan no cause for worry, objective is to detect maximum cases: Ashok Gehlot

Last week, the BJP took a dig at the Congress after its youth wing functionaries were caught allegedly smuggling liquor, saying this has exposed the opposition party's "character". The Indian Youth Congress president Srinivas B V dubbed the arrest a "conspiracy" which, he claimed, was aimed at defaming his organisation's relief work to help the poor during the ongoing lockdown.

BJP spokesperson Sambit Patra said while lakhs of his party workers are busy bringing food to the needy during the nationwide lockdown, the "national office-bearers of the Congress are smuggling expensive liquor" in the national capital. "This is the character of Congress... What a strategy Rahul ji," Patra tweeted, taking a dig at the former Congress president.

The death toll due to the novel coronavirus rose to 58 in Rajasthan with three fatalities on Thursday, while the number of cases climbed to 2,584 after 146 more people tested positive for the disease in the state, an official said. Additional Chief Secretary (Health) Rohit Kumar Singh said of the three deaths, two occurred in Jaipur and one in Chittorgarh. Jaipur alone has reported 32 COVID-19 deaths so far. As many as 146 new cases, including 97 in Jodhpur and 29 in Jaipur, have been reported. Four infections were detected in Ajmer, five in Kota, three in Chittorgarh, two each in Tonk and Banswara and Alwar, and a case each in Baran and Dholpur districts, the health department official said.

The state now has 2,584 confirmed cases of the coronavirus disease (COVID-19), out of which 618 have been discharged from hospitals. There are 1,633 active cases in the state at present, Singh said. The state is under lockdown since March 22 and a massive survey and screening is underway to track the people infected with the virus.