Rashtriya Lok Dal chief Jayant Chaudhary on Monday filed his nomination for the Rajya Sabha polls as a joint candidate of the Samajwadi Party-RLD combine. 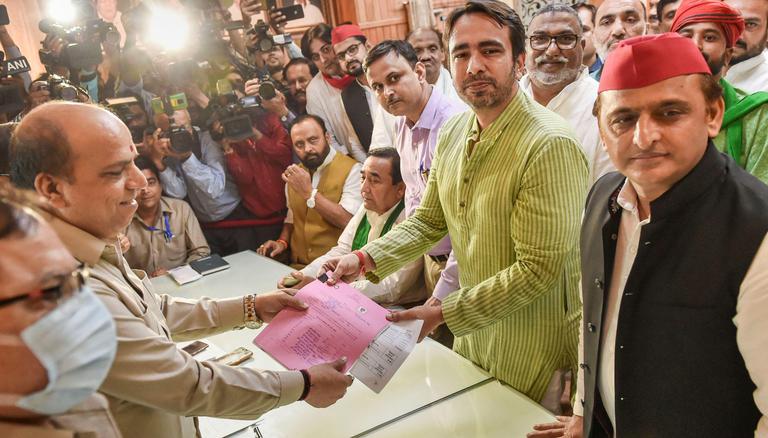 
Rashtriya Lok Dal chief Jayant Chaudhary on Monday filed his nomination for the Rajya Sabha polls as a joint candidate of the Samajwadi Party-RLD combine.

The SP won 111 seats in the recent Assembly polls in the state while its ally RLD got eight. The Suheldev Bharatiya Samaj Party, another ally of the SP, won six seats.

According to the Election Commission of India, the last date for filing the nomination for the Rajya Sabha polls is May 31. The documents will be scrutinised on June 1 and the last date for withdrawal of candidature is June 3.

Polling will be held on June 10 and the votes will be counted the same day.

After filing his nomination, Chaudhary said, "I thank Akhilesh (Yadav)Ji and the Samajwadi Party. Our alliance is strong and will remain so."

"I would try to raise issues concerning Uttar Pradesh in the Rajya Sabha with all my strength. If there are any atrocities, those will also be raised in the House. Our (SP-RLD combine's) common issues will also be raised," he said.

Asked about the Uttar Pradesh budget, Chaudhary said, "The people will be confused by the web of statistics but core issues like unemployment and payment to farmers should be addressed."

Akhilesh Yadav congratulated Chaudhary over the nomination filing and said that he was a joint candidate of the alliance.

With 273 MLAs in the Uttar Pradesh Assembly, the ruling BJP-led NDA is expected to comfortably get eight members elected to the Upper House of Parliament, while the SP and its allies, RLD and SBSP, with a strength of 125 legislators, will be able to ensure the victory of three candidates.

With 403 elected members in the Uttar Pradesh Assembly, a candidate will require at least 34 votes for victory in the Rajya Sabha polls.