Shiv Sena on Thursday, pointed out that the Centre had issued directions to prevent crowding during Ganeshotsav and Dahi handi, slamming Maha BJP's protests 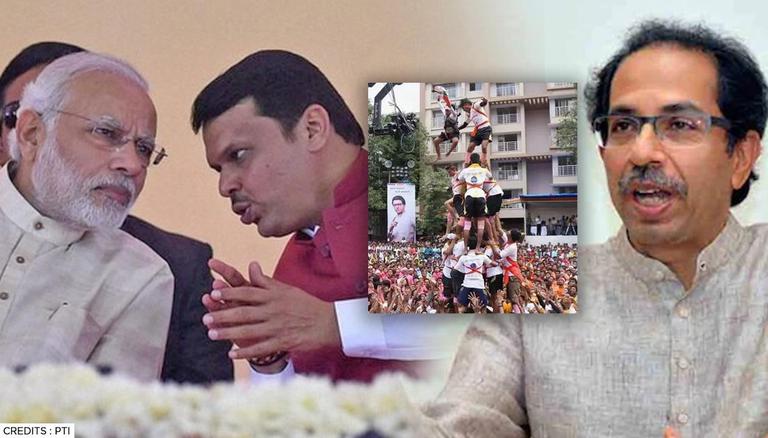 
As BJP demands temples across Maharashtra to be opened, Shiv Sena on Thursday, pointed out that the Central govt had issued directions to prevent crowding during Ganeshotsav and Dahi handi ahead of third COVID wave. Hitting out at its former ally, Sena via its mouthpiece 'Saamana' claimed that the BJP had been shaken due to its electoral defeat and hence was opposing for the sake of it. Urging Maharashtra BJP to protest outside its own party offices in Delhi, Sena asked why the party was not paying heed to its Central command's diktat.

Sena rebutted BJP's allegations of Thackeray govt being 'anti-Hindu', 'against gods', stating gods resided not only in temples but also in its citizens. Citing COVID compulsions, Shiv Sena said that the Thackeray government was compelled to keep religious places shut. Stating that both the Supreme Court and Bombay High Court had urged local authorities to prevent crowding in Mumbai, Sena said that it was not against festivities, but against Coronavirus.

On August 31, a senior Maharashtra Navnirman Sena (MNS) leader broke a Dahi Handi near busy Kalanagar junction which is located close to Chief Minister Uddhav Thackeray’s residence ‘Matoshree’ in suburban Bandra despite the ban, prompting the police to register an FIR against them. The Kherwadi police registered the case against MNS vice president Akhil Chitre and the party worker Omkar Khandekar. Six FIRs have been registered so far at Kasturba Marg, Ghatkopar, Worli, Kala Chowki, Dadar, and Sakinaka police stations in Mumbai against several workers of MNS, for organising the Dahi Handi events.

Apart from MNS, BJP too had held massive protests demanding celebration of Dahi Handis and immediate reopening of all temples. Freedom fighter Anna Hazare too has vowed to go on a hunger fast if the Thackeray government did not reopen all temples immediately. As per the new COVID guidelines, religious places of worship, movie theatres and swimming pools have remained completely shut in Mumbai. while malls, markets and offices have reopened partially.

Ahead of 'Dahi Handi', CM Uddhav Thackeray urged the public to avoid gatherings during Dahi Handi and Ganeshotsav. When Dahi Handi is celebrated, CM Thackeray urged the Dahi Handi Samanvay Samiti (DHSS) - the umbrella body of Govinda pathaks in the state - to stay away from such celebrations, instead organise blood donation camps. Two weeks ago, the DHSS had requested that the celebrations be allowed on a small scale, allowing small human pyramids of three-four layers, with a limited number of fully vaccinated participants.