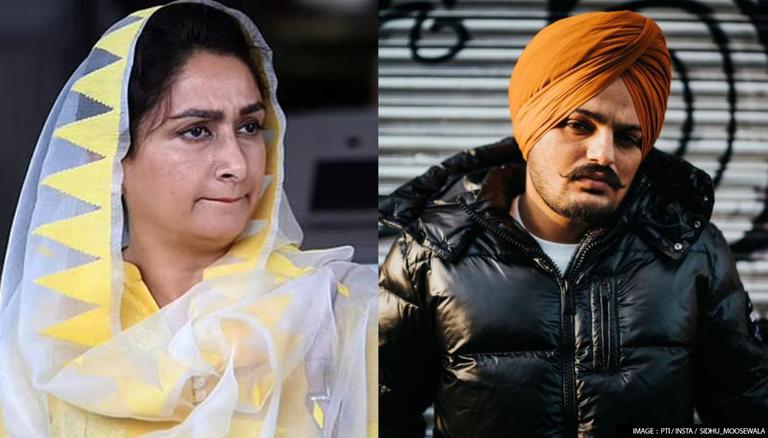 
Reacting to the murder of singer-cum-Congress leader Sidhu Moosewala, Shiromani Akali Dal MP Harsimrat Kaur Badal lashed out at the AAP government. Citing incidents such as the rocket-propelled grenade (RPG) attack on Punjab Police's Intelligence Headquarters in Mohali, she flayed the Bhagwant Mann-led government over the law and order situation in the state. Earlier, Punjab Congress president Amarinder Singh Raja Warring dubbed it a political murder and demanded an investigation by the NIA or a sitting judge.

Harsimrat Kaur Badal remarked, "The murder of Sidhu Moosewala in broad daylight has shocked every Punjabi. Two months ago, this government was formed in Punjab with great hopes and expectations. But many things are coming to the fore. Drugs are being sold in broad daylight and rocket missile is being launched and a bomb blast is taking place on a government building. He was a heartthrob for crores of people because he was a very popular singer. The way in which he was gunned down in the Mansa constituency where he fought the election is saying a lot about the law and order situation in Punjab."

In a shocking development on May 29, singer-cum-Congress leader Sidhu Moosewala was shot dead by unidentified gunmen in the Jawahar Ke village. The Mahindra Thar vehicle which he was driving was intercepted from the front by two cars- a white Bolero and a dark Grey Scorpio and heavy firing took place. While he was declared dead on arrival at the Mansa civil hospital, a cousin and friend who were travelling with him survived and were sent to Patiala for further treatment. After joining Congress on December 3, 2021, he contested the Punjab Assembly polls but lost to AAP's Vijay Singla from Mansa by 63,323 votes.

At that point in time, his induction created an uproar as he was booked by the Punjab Police in multiple cases pertaining to the promotion of violence and gun culture through his songs, firing an AK-47 rifle at the Badbar police firing range during the lockdown, etc. In fact, the then Punjab CM Amarinder Singh had expressed deep concern over the propagation of gun culture in Punjabi songs and affirmed that no leniency will be shown towards singers who lure innocent youths on the path of violence. AAP came under fire for his murder as the state government reduced his security just a day earlier along with 423 other VIPs.

Addressing a press conference, Punjab DGP VK Bhawra clarified that two police personnel from Commando Battalion were deployed with the singer but he didn't take them along while leaving the house. Moreover, he revealed that the Lawrence Bishnoi group has taken the responsibility for the singer's murder citing it as a retaliation to the killing of Vicky Midhukhera. An SIT comprising SP investigation Mansa Dharamveer Singh, DSP Investigation Bathinda Vishawajeet Singh and Incharge CIA Mansa Prithipal Singh has been formed to ensure a speedy and effective probe of the murder.