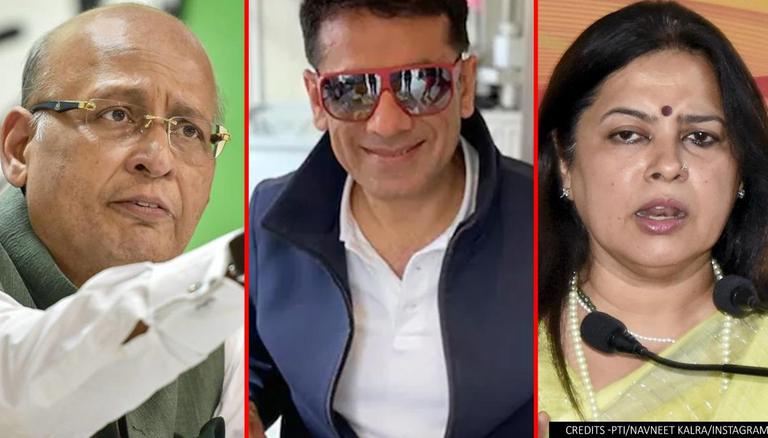 
Rebutting BJP MP & SC advocate Meenakshi Lekhi's claims of Congress link to Delhi restauranter Naveneet Kalra who has been accused of hoarding oxygen cylinders, his advocate and Congress leader Abhishek Singhvi on Sunday, 'pitied her bankruptcy'. Calling it a cheap gimmick, Singhvi pointed that a senior counsel, instructed by solicitors, appearing professionally for an accused, is being attacked by Lekhi. Singhvi who defended Kalra in Delhi HC has been attacked by Lekhi for representing the businessman amid Delhi's oxygen crisis.

I pity bankruptcy of so called lawyers like #MLekhi who do crass &cheap politics over all norms of fairness &professional conduct. A senior counsel, instructed by solicitors, appearing professionally for an accused, is attacked. My tweets yday try &educate such cheap gimmicks.

On Saturday, BJP MP Meenakshi Lekhi alleged that Congress is hand in glove with businessman Navneet Kalra accused of hoarding oxygen concentrators. Claiming that Kalra was involved in black marketing of over 7000 O2 concentrators, she hit out at the Sonia Gandhi-led party for her hypocrisy. According to her, ex-Congress president Rahul Gandhi and other party leaders were complaining about a shortage of oxygen while an artificial shortage was created by black marketing.

To buttress her claim about Congress' association with Kalra, she pointed out that he blamed Prime Minister Narendra Modi for the COVID-19 pandemic on his Facebook page. Moreover, she recalled that Congress leader Ajay Maken had nominated the businessman to the Delhi Golf Club in 2005-06 in his capacity as the Union Urban Development Minister. It is pertinent to note that she also slammed Congress MP and senior advocate Abhishek Manu Singhvi for representing Kalra in the Delhi High Court.

Amid the shortage of oxygen in the country, the Delhi Police recovered 524 seized oxygen concentrators out of which 96 were recovered from Khan Chacha restaurant, nine from Town Hall restaurant- both in Khan Market and 419 from Nege & Ju restaurant-cum bar in Lodhi Colony and the Matrix Cellular company’s godown in south Delhi’s Chhatarpur. Kalra is the owner of the aforesaid restaurants. The police registered an FIR under Sections 34, 120B, 188 and 420 of the Indian Penal Code and Sections 3 and 7 of the Essential Commodities Act. According to the police, the accused persons are involved in hoarding and black marketing of oxygen concentrators.

Moreover, it claimed that Matrix Cellular CEO Gaurav Khanna was overseeing the import of oxygen concentrators and their sale at high prices. 5 persons including Khanna, a sales executive and the manager of Nege & Ju restaurant were arrested by the police, but now Khanna is out on bail. Delhi HC has refused interim bail to Kalra, adjourning the matter to May 18.

READ | Congress denies BJP's allegation of having links with Navneet Kalra, calls it 'baseless'
First Published: 16th May, 2021 14:36 IST
SUBSCRIBE TO US