After Congress leader Adhir Ranjan Chowdhury deleted a tweet slamming China for violating Indian airspace along the LAC, senior BJP leader and Rajya Sabha MP Subramanian Swamy took a jibe at the party hinting that the senior leadership within the Congress was worried about retaliation.

Alongside the heated scuffle between the Chinese People's Liberation Army troops and Indian troops along the LAC in North Sikkim, Air Force was forced to rush its fighter jet patrols in Ladakh after Chinese military choppers were found to be flying close to the Line of Actual Control on Tuesday. "The Chinese military helicopters were flying very close to the Line of Actual Control. After their movement was picked up, the Indian Air Force fighter jets flew patrols in the area," government sources told news agency ANI.

Reacting to this Adhir Ranjan Chowdhury had attacked China in a now-deleted tweet stating that India knew how to 'defang venomous snakes' with many taking his threat to be related to Taiwan which is furiously mobilising support to attend the World Health Assembly (WHA) meeting on May 18. However, China is actively curbing its representation since it claims that Taiwan is part of its territory under its "One China Principle".

Congi LS leader in Lok Sabha wrote a harsh abusive tweet against China. TDK worried about a retaliatory Macao leak by China, smacked him and he abjectly withdrew&deleted his tweet. Chickens coming home to roost? 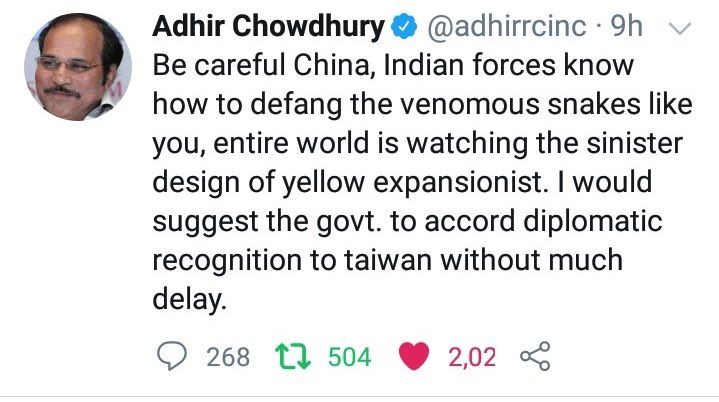 Border stand off in Sikkim

Indian Army sources on Sunday morning stated that the defence forces were involved in a stand-off with their Chinese counterparts near the India-China border in north Sikkim. The confrontation is reported to have taken place near the Naku La Sector and was solved later after local-level talks between the authorities.

Minor injuries were reported on both sides, and Indian Army sources went on to state that as per established protocol, the stand-off was resolved mutually. Such kind of an incident has taken place after some amount of time in the region, almost 2 years after the Dokalam stand-off.