Tej Pratap Embarks On Pilgrimage Amid Tussle With Tejashwi; Pictures With Guru Viral

Tej Pratap, as per reports, gone to Vrindavan to meet his Guru Ballabhacharya, and discuss with him religion, and other aspects of life. 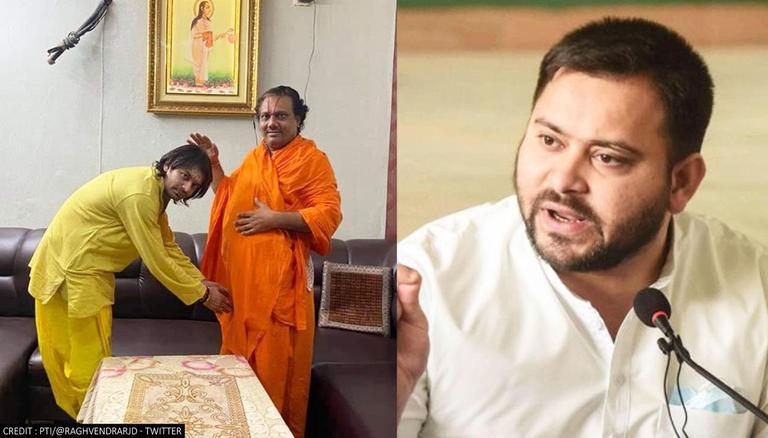 
Amid reports of a tussle with younger brother Tejashwi Yadav, Tej Pratap Yadav has reportedly embarked on a pilgrimage. Tej Pratap, as per reports, has gone to Vrindavan to meet Guru Ballabhacharya, and discuss religion, and other aspects of life with him. The photos from their meeting are doing the rounds on social media, in which Tej Pratap can be seen clad in all-yellow clothing, and taking the blessings of Guru Ballabhacharya, who is wearing an all-orange attire.

The meeting comes at a time things are not well between Tej Pratap and Tejashwi - the two sons of Rashtriya Janata Dal (RJD) Supremo Lalu Prasad Yadav. Miffed by the removal of his close aide Aakash Singh from the presidentship of the student wing of the party, Tej Pratap has been demanding the removal of the Bihar Chief Jagdanand Singh. However, Jagdanand Singh has the support of Tejashwi Yadav.

It all started with Jagadanand Singh nominating Gagan Kumar as president of RJD in Chhatra, replacing Aakash Yadav, a close aide of Tej Pratap. This decision, which was taken after a discussion with Tejashwi, miffed Tej Pratap, who started demanding Jagadanand Singh's ouster from the presidentship of the party in Bihar.

Tej Pratap, in order to convince Tejashwi, visited their Patna-based home last week, but within a few minutes walked out fuming, alleging that the meeting had been 'interrupted'. Displeased by Tej Pratap's behaviour, and his remarks in the media, Tejashwi, who had kept mum in the matter so far, stated that Tej Pratap should be a 'little more disciplined'. "No matter what, indiscipline is not okay. Indiscipline within the party causes trouble. Tej Pratap" Tejashwi had said.

The cracks between Tejashwi and Tej Pratap became all the more evident when both the brothers celebrated Rakshabandhan with family in Delhi but refrained from uploading pictures with each other.