Tej Pratap, Tejashwi Missing In Each Other's Rakshabandhan Pictures Amid Rumours Of Rift

Lalu Prasad Yadav, and his wife and party leader Rabri Devi have seven daughters, and just two sons- Tejashwi and Tej Pratap who had been at loggerheads lately. 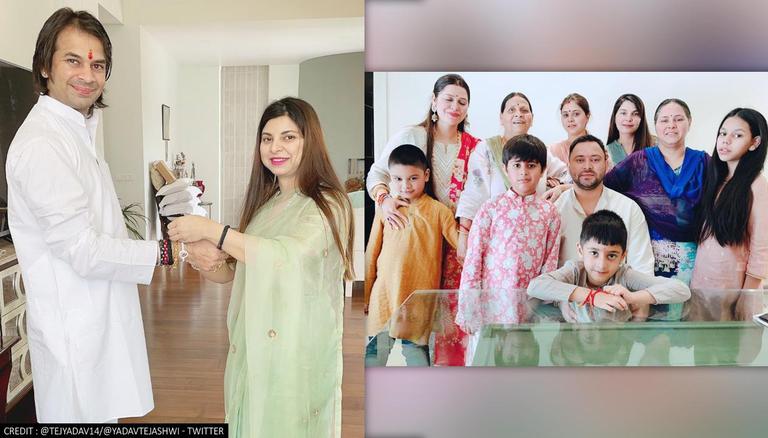 
Differences between Lalu Prasad Yadav's two sons -- Tejashwi and Tej Pratap came out in the open on Sunday. Both the Yadav brothers, who are presently in Delhi to celebrate Rakshabandhan, shared pictures with the family of the celebration. However, they were both spotted missing from each other's pictures. This comes at a time when the Rashtriya Janata Dal is experiencing an internal tussle, involving the decision of the party chief of Bihar Jagadanand Singh to sack Aakash Yadav, a close aid of Tej Pratap. It is said that Tejashwi was part of the meeting in which the decision was made.

Tejashwi, Tej Pratap celebrate Rakhi without each other?

First, Tej Pratap took to his official Twitter handle and shared images with one of his sisters. He, along with the pictures uploaded a paragraph in Hindi, which roughly translates to, "I vividly remember our child, the fighting and then the reconciliation thereafter. This is what the bond of brothers and sisters is, and to make this bond all the more special, the festival of Rakshabandhan is here."

Soon after, his younger brother Tejashwi Yadav shared several pictures with his sisters, including the one with whom Tej Pratap had shared pictures. He wrote a similar message for his sisters in Hindi that roughly read, "My best wishes on the auspicious festival that celebrates the love, trust, and respect between brothers and sisters." He added, "Let us all pledge to protect all sisters, daughters, and mothers on this day."

READ | Tej Pratap walks out of meeting with Tejashwi; 'interrupted' amid talks over sacking aide

RJD supremo Lalu Prasad Yadav, and his wife and party leader Rabri Devi have seven daughters, and just two sons- Tejashwi and Tej Pratap. The two had been at loggerheads with each other lately. On Friday, August 20, while talking to the media, Tejashwi had stated that Tej Pratap should be a 'little more disciplined'. "No matter what, indiscipline is not okay. Indiscipline within the party causes trouble." Tejashwi had said before leaving for Delhi

Thereafter, Tej Pratap had come forward and said that his brother has been 'brainwashed'. Tej Pratap and Tejashwi had a meeting on Friday, of which the former walked out, claiming that they were 'interrupted'. The meeting had come just a couple of days after RJD's state chief Jagadanand Singh nominated Gagan Kumar as president of RJD in Chhatra, replacing Aakash Yadav, a close aide of Tej Pratap.