Tripura CM Biplab Kumar Deb said that the party's Civic poll victory was a "befitting reply to conspirators" who tried to show the state in a bad light. 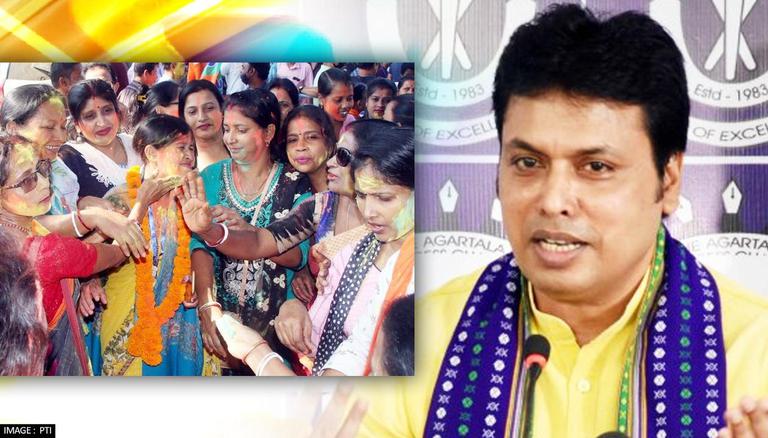 
Tripura Chief Minister Biplab Kumar Deb hailed BJP's thumping victory in the Urban Body elections and said that the party's electoral victory was a "befitting reply to conspirators" who tried to show the state in a bad light.

After the victory, Tripura CM offered his prayers at Mata Tripurasundari Temple on Monday. In Tripura civic body elections held on November 25, the BJP won with a majority of 217 seats out of 222 seats, while the CPI-M registered victory on three seats. TMC and TIPRA Motha got hold of only one seat each, according to the Election Commission of India.

"People of Tripura made it possible to bring a big political change in the year 2018 by dislodging the 25-year-old Left regime. People have reposed their faith in Prime Minister Narendra Modi and in these elections as well people's mandate has gone towards the BJP,"Deb told ANI.

Taking it to Twitter, CM Biplab thanked PM Modi and said, "Thank you very much Honorable PM Narendra Modi Ji for your affection for Tripura. Today's referendum reflects people's trust in your good governance. I assure you, we will work hard to ensure that your affection & developmental policies reach every single individual of the state".

Thank you very much Hon PM Shri @narendramodi Ji for your affection for Tripura.
Today's referendum reflects people's trust in your good governance.I assure you,we will work hard to ensure that your affection & developmental policies reach to every single individual of the state. https://t.co/4DM22DUdUp

Deb alleged that the civic election results came at a time when a well-orchestrated conspiracy was being hatched to defame the land of Mata Tripureswari. He said that the people of the state have slapped a befitting reply to miscreants who tried to challenge the sanctity of Tripura.

"Tripura's image across the world was being intentionally tarnished. Highly objectionable words were being used against the state. The land that is revered as the land of Mata Tripurasundari; the land that has a rich history of harmony between tribal and non-tribal communities, the heritage of visionary Maharaja Bir Bikram was tried to be defamed.

The sanctity of the state has been challenged and the people of Tripura have slapped a befitting reply to this evil design. The electorates of the state taught the lesson the way it should be," the Chief Minister told ANI.

The Tripura Chief Minister further appealed to the newly elected members to work hard for the welfare of people and ensure that the deserving ones receive the benefits of public welfare schemes.

"From this temple compound, I want to urge the newly elected members of the various civic bodies to work for the people of the state. I want to appeal to them to ensure that each of the deserving candidates gets what they deserve through the public welfare schemes of the state and central government", he told ANI.

On being asked about the opposition's targeted campaign against him, Deb said that the party does not believe in personal attacks for political gains.

"The party that I belong to does not do politics of targeting individual leaders. We do politics, banking our organizational mettle and support of the public towards us. Generally, I ignore those things as our way is the way of positivity that PM Modi showed to the whole world. We believe in the path of Swami Vivekananda and Bankim Chandra which I feel is the only way to success," he added.