Naqvi accused Mehbooba Mufti of being heavily influenced and afraid of separatists saying that she was trying to spread the same fear to the citizens. 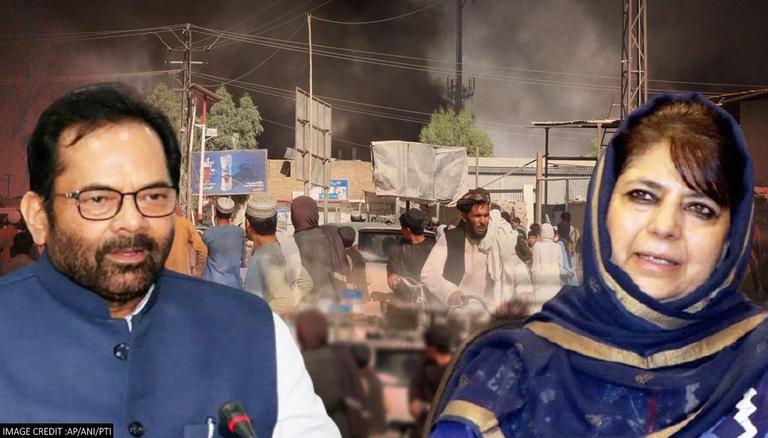 
Union Minister Mukhtar Abbas Naqvi on Sunday lashed out at PDP Chief Mehbooba Mufti's comments drawing parallels between the situation in Afghanistan to J&K, asking her to stop spreading fear through her words. Naqvi accused Mufti of being heavily influenced and afraid of separatists saying that she was trying to spread the same fear to the citizens. He added that such words were only used by those who had once ruled the state of J&K by sitting on the shoulders of separatists, and were hence demanding the revocation of Article 370.

"These are not spoiled words but are influenced words. Why I'm saying influenced words is because when you have an impact of separatists upon you this type of statement comes out. They are those people who sat on the shoulders of separatists and ruled the state. They themselves are scared but trying to scare others. I would like to say don't be scared and don't try to scare others. Stop this type of language," Mukhtar Abbas Naqvi said.

Former Chief Minister of Jammu and Kashmir Mehbooba Mufti on Saturday made an outrageous statement in demand of restoration of Article 370. Ranting over the 'Talibanisation' of India's probing agencies by the Bharatiya Janata Party (BJP), she asked the Centre to either start talks on J&K or witness a situation similar to what was happening in Afghanistan.

Mufti said, "A princely state like Jammu & Kashmir is nowhere else in the world. People of Kashmir are not cowards because they have patience. The path of non-violence takes more courage. There is no courage required to take up arms, be it for the forces or the people of Kashmir. But the day this patience of Kashmiris will be broken then you will all be destroyed."

"Don't test us, see what happened in the neighbouring country Afghanistan. Such powerful American forces had to leave Afghanistan. So start talks on Kashmir and rectify your mistake of illegally removing Article 370 and bifurcating Jammu & Kashmir," Mufti further stated.

She also claimed that the BJP is using investigative agencies against opposition leaders and students behind bars. "BJP has Talibanised it. It means they run the institutions at gunpoint," she alleged.