Rajasthan BJP President Satish Poonia said that trends have started to come that the saffron party will come to power in the state in the 2023 polls. 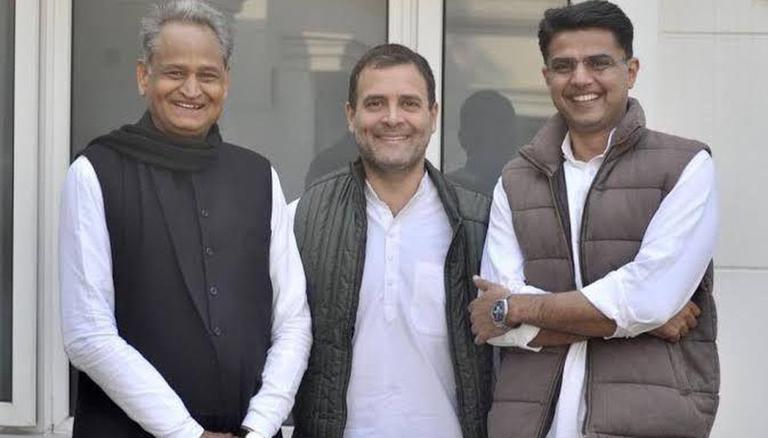 
Bharatiya Janata Party (BJP) on Sunday took a swipe at the Congress over the political crisis in Rajasthan. Melodramatic developments unfurled in Rajasthan as a Congress MLAs loyal to Chief Minister reached the assembly speaker's residence late at night to submit their resignation ahead of a legislature party meeting which was called to decide his successor.

The plot suggested a worsening power battle between the Chief Minister and Sachin Pilot who was tipped to be Gehlot's replacement after the latter announced his candidature for the Congress president's post.

Union Environment Minister Bhupender Yadav took a jibe at the Congress amid the political crisis and shared a picture of Ashok Gehlot and Sachin Pilot with Rahul Gandhi and asked Congress to unite them first before 'Bharat Jodo Yatra'.

Rajasthan BJP President Satish Poonia said that trends have started to come that the saffron party will come to power in the state in the 2023 assembly elections.

Union Jal Shakti minister Gajendra Singh Shekhawat also took swipe at the current situation and said that the government of badebandi (fencing) is ready to go back to the barn again.

Fallout in Congress over CM face

Around 92 Congress MLAs who are loyalists to CM Gehlot reached Speaker CP Joshi's residence in buses to submit their resignation ahead of a legislature party meeting which was likely to pick Gehlot's successor. According to sources, they were against the elevation of Sachin Pilot as Chief Minister.

Congress has 108 members in the 200-member house. It also enjoys the support of 13 Independents.

READ | Amid buzz of Pilot taking over as Rajasthan CM, Gehlot hints things 'not in his control'

"We are going to the speaker's residence and will submit our resignation. 10-15 MLAs are being heard while other MLAs are being neglected. Party doesn't listen to us, decisions are being taken without it," state minister Pratap Singh Khachariyawas told reporters.

Some of its MLAs said Gehlot's successor should be somebody who was instrumental in rescuing the government during the political crisis in 2020 and not someone who was involved in the bid to topple it, a veiled reference to Pilot.