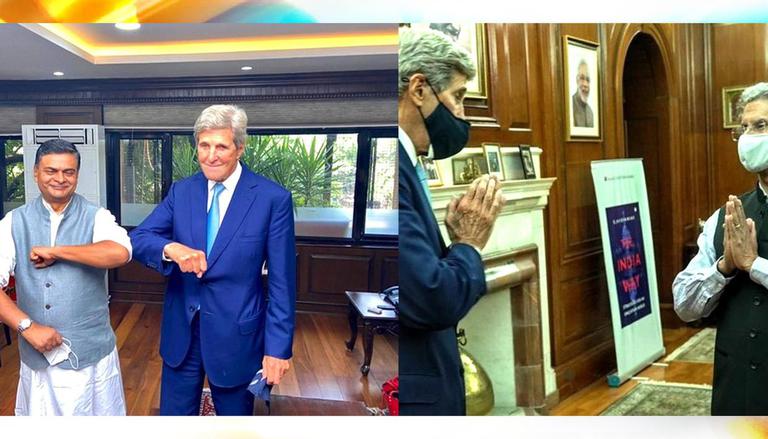 Kerry also congratulated India for remarkable progress towards achieving its climate target and lauded Prime Minister Narendra Modi for setting "ambitious climate targets". This came ahead of the 26th Conference of the Parties (COP26), which is going to start on November 1, 2021.

According to a statement issued by the US Department of the state, "Special Presidential Envoy for Climate John Kerry will travel to India from September 12-14, 2021 to engage with international counterparts on efforts to address the climate crisis."

The statement further read, "During his visit, the United States and India will launch the Climate Action and Finance Mobilization Dialogue (CAFMD), one of the two main tracks of the U.S.-India Agenda 2030 Partnership that President Biden and Prime Minister Modi announced at the Leaders Summit on Climate Change in April 2021."

On his second day of the visit, Kerry also met External Affairs Minister S Jaishankar and discussed climate goals. The US Envoy for climate also launched the Climate Action and Finance Mobilisation Dialogue. Notably, CAFMD is one of the two major tracks of the India-US Agenda 2030 Partnership that was agreed upon between US President Joe Biden and India's Prime Minister Narendra Modi at the Leaders Summit on Climate.

"PM Modi has set very ambitious targets in India. The target of 450 GW by 2030, of renewable energy, is one of the most powerful goals in the world. You've already reached about 100 GW. I congratulate India for the remarkable milestone: US Spl Presidential Envoy for Climate John Kerry, in Delhi".

The US special envoy claimed that the Climate Action and Finance Mobilisation is a "powerful avenue for US-India collaboration".

The Indian government has joined hands with the United States to form the India-US Climate and Clean Energy Partnership, which aims to mobilize investments and enable green collaborations. Earlier in the Leaders Summit on Climate, PM Modi had welcomed partner countries to take part in the Clean Energy Project.

Meanwhile, Kerry is expected to meet other ministers, private sector leaders, and policymakers to speed up India's clean energy transition and raise global awareness on climate issues. Ahead of the 26th Conference of the Parties (COP26), the US Department of the state, in a statement, said that Kerry's visit to India would bolster America's bilateral and multilateral climate efforts towards building global climate awareness as America is set to host the United Nations Framework Convention on Climate Change (UNFCCC) from October 31 to November 12, 2021, in Glasgow, United Kingdom.

Image: ANI
(With inputs from ANI)