In a key development on Thursday, AAP announced that Colonel (retd) Ajay Kothiyal will contest against Uttarakhand CM Tirath Singh Rawat in the Gangotri bypoll. 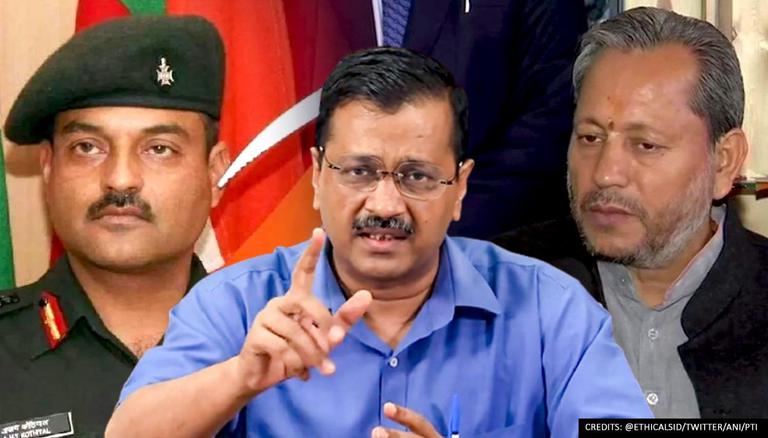 
In a key development on Thursday, AAP announced that Colonel (retd.) Ajay Kothiyal will contest against Uttarakhand CM Tirath Singh Rawat in the Gangotri bypoll. The former principal of Uttarkashi-based Nehru Institute of Mountaineering, Kothiyal has been hailed for his rescue and rehabilitation efforts in the aftermath of the 2013 Kedarnath tragedy. Running an organization that trains the locals to join the Armed Forces, he joined the Arvind Kejriwal-led party on April 19 this year.

Writing on Twitter, the retired colonel stated, "BJP has destroyed Uttarakhand in the last 5 years. I am fortunate that my party gave me the chance to contest against CM Tirath Singh Rawat in the Gangotri by-election. I have visited many villages in Gangotri. I am confident that the people will win this time".

Commenting on this development, Delhi CM Arvind Kejriwal wrote, "Congratulations Colonel sahib. You served the country as an Army officer by putting your life at stake. Now, Uttarakhand is looking at you (in anticipation). It is necessary to clean the corrupt politics here". This is seen as a precursor to the 2022 Assembly election as speculation is rife that Kothiyal will eventually be declared as the CM face of AAP.

Earlier on Wednesday, Rawat was summoned by the BJP high command to the national capital. This came even as the saffron party held a three-day 'Chintan Shivir' at Ramnagar from Nainital from June 27 to chalk out a roadmap for the 2022 Assembly elections amongst other issues. It was attended by the CM, Ministers, BJP general secretary (organisation) BL Santhosh, Uttarakhand in-charge Dushyant Gautam and other party members.

Sources told Republic TV that the upcoming by-elections in the state will feature in the discussion between BJP president JP Nadda and Rawat. When the latter took oath as the Chief Minister of Uttarakhand on March 10, he was a sitting member of the Lok Sabha from the Garhwal constituency. Thus, the MP has less than three months left to get elected to the state Assembly barring which he will have to put in his papers.

In the 2017 Uttarakhand Assembly election, the Harish Rawat-led Congress government lost power after BJP won 57 seats in the 70-member House. Thereafter, Trivendra Singh Rawat served as the Chief Minister of the state until March 9, when he resigned because of a "collection decision" taken by the BJP top brass. AAP has tried to make inroads in the state in the last few months with a mass outreach campaign titled 'Uttarakhand me bhi Kejriwal', increasing online presence besides regular visits by high-profile leaders such as Manish Sisodia.

However, non-BJP and non-Congress parties have failed to make any gains in Uttarakhand so far which is evident from the failure of Uttarakhand Kranti Dal, SP and BSP. The 2022 Assembly polls will be the first election that AAP is contesting in the state since the 2014 Lok Sabha election where 5 of its candidates lost. In 2018, AAP's Dehradun mayoral candidate Rajni Rawat stood a distant third behind BJP and Congress.