After Mamata Banerjee-led TMC decided to abstain from voting in the upcoming Vice President election, Congress and the Left hit out at the party's stance. 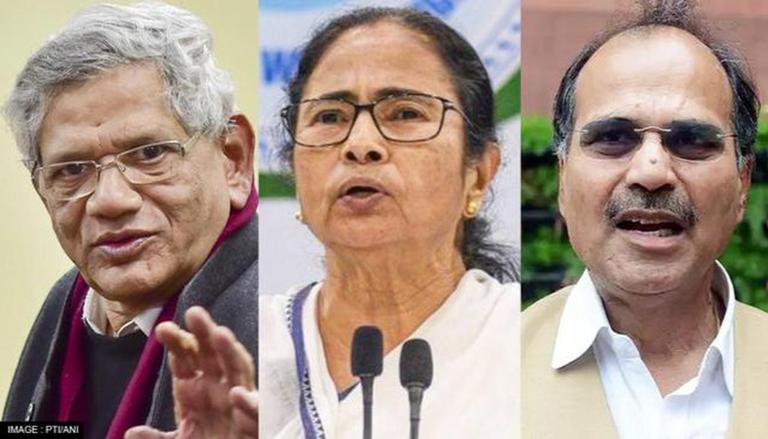 
After TMC decided to abstain from voting in the upcoming Vice President election, Congress and the Left hit out at the party's stance on Thursday. Dubbing it the "height of hypocrisy", CPI(M) contended on Twitter that abstention was equivalent to supporting BJP. Meanwhile, senior Congress leader Adhir Ranjan Chowdhury opined that Banerjee had run away after seeking to spearhead the opposition in the lead-up to the 2024 Lok Sabha polls.

Speaking to the media, the Leader of Opposition in Lok Sabha observed, "WB Governor Jagdeep Dhankhar is VP candidate, he has often confronted Bengal CM Mamata Banerjee. He met CM Banerjee and Assam CM HB Sarma in Darjeeling. Next day he was announced as VP candidate, which means there was a Darjeeling pact among them".

"They had an understanding among themselves. CM Mamata Banerjee didn't help Yashwant Sinha. She doesn't want to have any confrontation with the BJP and that's why now they want to abstain instead of voting for opposition's VP candidate Margaret Alva," he added. The election for the Vice President's post will take place on August 6.

TMC has decided to help BJP in Vice - President's election by 'abstaining'. It's Height of Hypocrisy.

When Opposition parties are speaking of unity then it's the Congress party's responsibility to encourage that. WB CM Mamata Banerjee wanted to spearhead the united Opposition, but then, they ran away, and the Congress didn't: Congress leader Adhir Ranjan Chowdhury(21.07) pic.twitter.com/oWY7uujSHb

Explaining the rationale for not backing Alva in the Vice President election, TMC general secretary Abhishek Banerjee argued that she was selected as the candidate without keeping the Mamata Banerjee-led party in the loop. This is being perceived as a big blow to opposition unity even as BJP is strengthening its presence across the country. While TMC leader Yashwant Sinha was announced as the joint opposition's presidential candidate, the West Bengal CM set the rumour mills abuzz by commenting that Droupadi Murmu could have been the consensus choice had BJP consulted other parties in advance.

TMC's abstention policy came as a surprise given the public acrimony between NDA candidate Jagdeep Dhankhar and the WB government. Since taking over as the Governor of the state in July 2019, Dhankhar was at loggerheads with the Mamata Banerjee-led regime. While the Governor stressed that he was exercising his constitutional duties, TMC accused him of interference and sought his ouster on multiple occasions.

The frayed relationship was on display on the first day of the Budget session in March when Dhankhar was unable to give his inaugural address to the Assembly as BJP MLAs carrying posters and photographs of alleged victims of civic poll violence came to the well to stage a protest. As the legislators of the JP Nadda-led party refused to let the proceedings begin, he attempted to leave the Assembly even as ruling party MLAs including Mamata Banerjee appealed to him to deliver his address. The Governor alleged that women Ministers and TMC MLAs trooped on both sides of his seat disregarding decorum and propriety.