A rare edition of 'Harry Potter And The Philosopher's Stone' auctioned for a whopping amount, fetches highes price ever for a 20th century work of fiction. 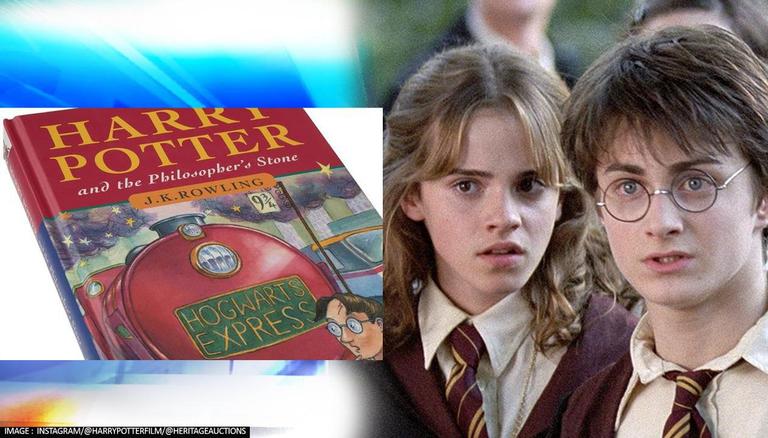 
Marking milestones since decades, the seven fantasy novels from the Harry Potter series penned by British author J. K. Rowling has been entertaining readers of all age groups for a long time now. Ever since the release of the first novel, Harry Potter and the Philosopher's Stone, on 26 June 1997, the franchise has met with immense acclaim and commercial success globally. The series has garnered an immense fandom among adult audiences as well as young readers and the books of the acclaimed franchise are often regarded as cornerstones of modern young adult literature.

Heritage Auctions on Tuesday announced that a rare hardcover edition of Harry Potter and the Philosopher's Stone fetched a world record price that a 20th-century work of fiction could claim.

As per Daily Mail, a rare first edition of Harry Potter and the Philosopher's Stone was sold for a world record of £356,000, the highest price ever achieved for a 20th-century work of fiction. The auction was held by Heritage Auctions of Dallas, Texas and the bidding commenced at £50,000 and huge competition drove up the price and the final price was set as £287,000. Addendum the extra fees added by the auction house, the book was sold to an anonymous buyer for £356,000.

In a statement shared by Heritage Auctions on Instagram, they wrote, "The hardcover edition remains notably scarce, as only 500 copies in this binding were produced, chiefly for distribution to public libraries. That same year, a copy made its way into the hands of David Heyman of Heyday Films, who had been searching for a suitable children's book to adapt into a film."

Potterheads can rejoice as the reunion episode featuring the lead cast of Harry Potter movies, Daniel Radcliffe, Emma Watson, Rupert Grint & more are set to grace the OTT space through Harry Potter 20th Anniversary: Return to Hogwarts, which is all set to premiere on HBO Max on January 1, 2022. The special episode will mark the 20th anniversary of the release of the franchise's first film, Harry Potter and the Sorcerer's Stone. Apart from Radcliffe, Watson and Grint, other members of the cast including Tom Felton, Evanna Lynch, Mark Williams, James and Oliver Phelps, Bonnie Wright, Helena Bonham Carter, Ralph Fiennes, Gary Oldman, Imelda Staunton, and Matthew Lewis, will be attending the reunion special, which was shot at the Warner Bros Studio Tour.