Bangladesh's 'Never A Bridge Too Far' 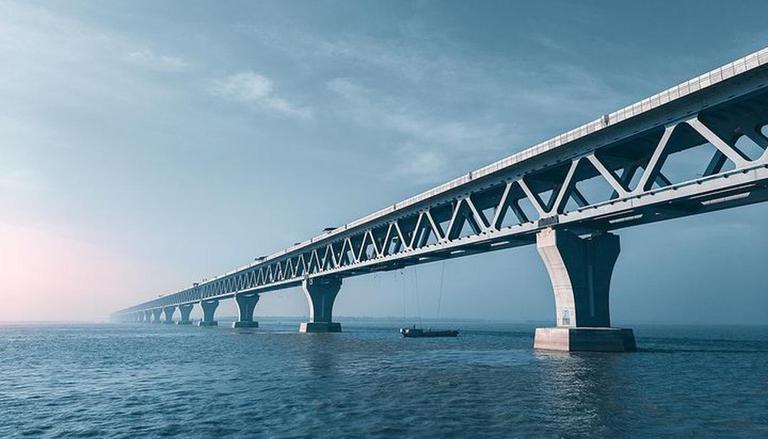 
Bangladesh is seeking to make a statement that it has arrived, when it formally opens to traffic the 6.15 km double-decker railroad bridge on the mighty Padma River on June 25.

This is the biggest infrastructure project completed in the country since it emerged as an independent nation after a bitter and bloody separatist campaign against Pakistan in 1971.

"The important thing about this project is that it has been entirely done with our own financial resources. Foreign companies were involved in its construction but our government successfully mobilized the funds," said Bangladesh's information minister Hassan Mahmud.  "That is no mean achievement for a country which was once written off as a bottomless basket dependent on foreign aid," he told a group of visiting Indian media persons.

Bangladesh decided to take up the $3.9 billion Padma bridge project with its own funds after the World Bank stalled the proposed funding citing "credible evidence of corruption."

For Prime Minister Sheikh Hasina, the completion of the Padma bridge is a huge image booster because she is the one who brushed aside cautious counsel and decided to take the plunge, despite funding issues and much Opposition violence in the run-up to the 2014 parliament polls.

"When the World Bank refused to finalise the funding and other funders backed off over unsubstantiated corruption allegations, Opposition leaders and critics of the Hasina government went to town saying the bridge will never be completed. They described her decision to fund it with Bangladesh's own resources as 'madness'. "But all these people have now been silenced," said former minister Tarana Halim, an actress-lawyer turned politician.

"Hasina's decisive leadership has given Bangladesh its Golden Decade of Development. We have crossed big neighbour India in per capita income and per capita GDP growth, something that was unthinkable before. Bangladesh has graduated from the Least Developed Countries and is all set to emerge as one of the Asian tigers," Ms. Halim said.

Economists predict the Padma Bridge, which will now connect the capital Dhaka with 21 southern districts and the country's second port Mongla, will contribute 1.2 percent to annual GDP growth.

"The Padma Bridge will remove the last great geographical barrier that divides the country. Bangladesh used to be divided into disjointed parts because of two mighty rivers, Padma and Jamuna. The Bangabandhu bridge over Jamuna opened in 1998 removing the first barrier and now the Padma bridge will take us towards an integrated and well-connected economy,"  Prof Rahman was quoted as saying on the CPD website.

The Padma bridge will sharply boost regional connectivity with India as the main beneficiary. Rail and Road travel between Calcutta and Dhaka will be reduced by half, with a similar cascading effect on travel time between West Bengal and India's northeastern states.

Indian high commissioner in Dhaka Vikram Doraiswamy said the Padma Bridge will hugely contribute to connectivity between Bangladesh and India. " The sub-region supporting the BBIN initiative will greatly benefit," he said, praising Sheikh Hasina's courage in the success of the mega project.

A World Bank report "Connecting to Thrive" observed last year that improved connectivity between Bangladesh and neighbouring Indian states can boost the national incomes of the two nations by 8 to 10 percent and exports by 182 to 297 percent.

"Projects like the Padma bridge will bring us closer to that dream," said Indian economist Bipul Chatterjee.

“The opening of the bridge to road and rail traffic will bring immediate benefits to the direct users. The road distance from Dhaka to nearly all major destinations in the southwest region will be reduced by 100 kilometres or more, bringing tremendous savings in the time and costs of passenger and commodity movement, vehicle operation and maintenance costs and reducing the wasteful burning of fossil fuels,” said Zahid Hussain, former Lead Economist at the World Bank (WB).

“While the Southwest Region is expected to benefit most, the reduction in the cost of internal trade will spread to economic sectors all over the country, generating additional value-added and creating new job opportunities through improved connectivity with other important cities and core facilities on the opposite sides of the Padma River,”  Hussain added.

He cited studies that have indicated that the bridge would increase the national GDP growth rate by 1.2 percent and the gross product in the southwest region by 35 percent. “It will create employment opportunities for 1.2 percent of the total labour force.

Despite delays caused by funding uncertainties, implementation hiccups and cost escalation by over three times relative to the original estimate, the projected size of the excess of benefits over costs remains robust, according to most assessments,”  Hussain said, adding that significant impacts are also expected on international trade between neighbouring countries such as India, Nepal, Bhutan, and Myanmar.

The southwest region,  approximately 27 percent of the country's land area and home to nearly a quarter of its over 160 million population,  has remained one of the least developed parts of Bangladesh, primarily due to a lack of connectivity to the rest of the country, according to an Asian Development Bangladesh (ADB) study in 2011.

“The proportion of the population below the poverty line in the southwest region remains about five percent higher than in the rest of the country,” stated the ADB report. The most important bottleneck was the lack of a bridge on the Padma River, which kept the region more isolated from the eastern and north-east areas, the report observed at that time.

But with Padma Bridge in sight, economic benefits from the multi-billion-dollar project are going to be really big. The Padma Bridge would save about two hours of travel time between the Dhaka division and the southwest region for cars and buses and between five to ten hours for trucks, according to a World Bank study in 2011.

According to a Japan International Cooperation Agency (JICA) study, a 10 percent decrease in travel time to and from Dhaka will lead to a 5.5 percent increase in district economic output. The annual average daily traffic would be around 29,278 by 2024, as projected by ADB. The benefits of the project would be equivalent to an annual increase of at least 1.7 percent of the southwest region GDP in value and of 0.56 percent of the annual increase in national GDP, according to the 2011 World Bank (WB) project appraisal report.

It also said the poverty reduction rate would increase by one percent in the southwest region and by 0.8 percent at the national level. The Padma Bridge will reduce travel time between Dhaka and Mongla port ( distance of 170 km), which is closer to Dhaka than the main port Chittagong ( distance264 km ). More traffic to Mongla will reduce the mounting congestion at Chittagong caused by Bangladesh's rising exports.

The Padma bridge will be an integral part of the Asian Highway One and Trans-Asian railway network systems (Sylhet-Kanchpur-Dhaka-Mawa-Jashore-Benapole, connecting Calcutta in eastern India, said the World Bank's appraisal report.

The river training works of Padma Bridge have helped control river erosion, a recurrent acute problem in Bangladesh and one of the major causes of landlessness and extreme poverty.

Trade and tourism could be another important source of growth, experts say." A river cruise down the Padma river past the bridge from India's West Bengal can become a huge draw for tourists," says Calcutta-based tour operator Abhra Bhattacharya.

For PM Hasina, the rosy economic picture emanating from the Padma Bridge will come as a shot in the arm in the rundown to the parliamentary elections due in Dec 2023. Despite Opposition protests over enforced disappearances and rigged elections, even her critics admit Hasina has a brilliant record of economic growth and human development during her thirteen years in power.

"This report card is what she will hold up to the nation to beat incumbency when she seeks a record fourth term in power," says Sukharanjan Dasgupta, who has authored books on Bangladesh. " There is no leader in South Asia who can come up with such a strong track record of economic growth which trickles down," he said.