India-China Relations In A Post-COVID-19 World

With the COVID-19 pandemic, China has lost its ‘aura’ and India must be quick to recognize this shift & seize the initiative to make some much-needed change

COVID-19  (Corona Virus Disease 2019)  has put the spotlight on China like never before. It is believed that this virus originated in the city of  Wuhan, Hubei Province of China, sometime in December 2019 and has rapidly assumed global pandemic proportions. There is definitely an element of justifiable suspicion with regards to Chinese candour (or the lack of it), with regards to the actual origin and dissemination of this Virus. China operates under a Communist ‘Iron Curtain’ and the Chinese State decides what news will flow out of  China to the rest of the world, thereby severely impairing the credibility of any such news/information. Only time will tell if the Chinese subterfuge resulted in avoidable deaths of thousands of souls and loss trillions of dollars to global economies.

Which brings us to the central theme of this piece – how should India approach China in a  post-Covid19 world? Against  China, India’s hasn’t always exhibited the same resolve in foreign policy matters that it has against Pakistan. The Chinese economic might, second only to the United  States, was probably a deterrent for several countries to speak out clearly against   China and its policies. But with the COVID-19 pandemic, China has lost its ‘aura’ and India must be quick to recognize this shift and seize the initiative to make some much needed tactical and strategic changes to its China policy.

READ | Here's Why Coronavirus Will Not Be Fatal For India

Firstly, India must strongly request the SAARC nations (other than Pakistan, for obvious reasons) to reconsider their participation in the Belt and Road Initiative (“BRI”). The hyper-ambitious BRI is the dream project of the Chinese commissars, especially its incumbent President Xi Jinping. It consists of the creation and development of several rail, road and sea-based international trading corridors emanating from China to almost the 50% of the globe, by creating the required physical infrastructure using Chinese money, labour and technical expertise. The Chinese have sought to market the BRI as the “New Silk Route”. The ancient Silk Route was an important trading corridor between China and Europe passing through the Indian sub-continent and Central Asia,  before events in medieval history rendered this route unviable. 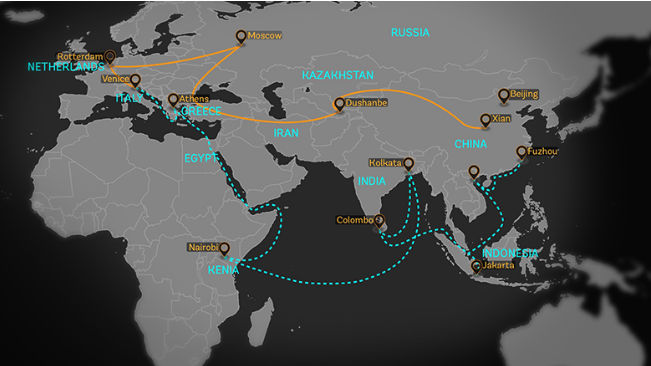 But in reality, the BRI is closer to a 21st-century Chinese version of the British East India Company of 17th-century vintage,  rather than the Old Silk Route. Just as several Asian countries/kingdoms underestimated the East India Company and thought them to be mere traders, similarly the 70 countries, through which the BRI worms its way, think that this is an innocuous international trade initiative by the Chinese, to aid and develop the participating countries' economies. Those countries forget the cardinal rule of international politics - "there ain’t any free lunches",  and in this context one may add, that there certainly ain’t any “free Chinese Lunches”!

The BRI has the potential to put the participating countries, which do not enjoy even a fraction of Chinese fiscal strength, in an inextricable and spiralling Chinese debt trap, swiftly reducing them from trading partners to mere vassal/satellite states of the Chinese Dragon. Through the  BRI, China would own the assets it creates in the participating countries and use these assets not only to sell their goods creating a captive market, but also to exercise global economic and political leverage. This is the Chinese formula to unseat the USA as the world’s eminent financial and military super-power.

India has rightly stayed away from this BRI. From the Indian perspective, an important sub-project of the BRI is the CPEC  (China- Pakistan Economic Corridor) which consists of investments of billions of dollars in overhauling and creating several land and rail-based physical infrastructure projects in Pakistan.

I have always been intrigued by the China-Pak bromance. On the face of it, there are no cultural, political or ideological affinities between the godless communists and a jihadi deep state which has perfected the art of using religion-based terrorism to further its international political objectives. But yet, no Sino-Pak summit is complete without hyperbolic proclamations of "Iron Friendship between All-Weather Friends” whose friendship is purportedly "Higher than Mountains, Deeper than Oceans and Dearer than Eyesight". You would hardly come across such exaggerated puffery, between any two countries especially when

Pakistan and China would not have even shared a de facto border had the Pakistanis not perfidiously occupied PoK, post-1948. Common hatred for India is the only glue that binds these two “all-weather” friends. India is the only country in China’s extended neighborhood that is immune to its bullying. Hence this alliance, to bind India down in local complexities and prevent its rise as a credible rival to China on the global platform.

Secondly,  with tacit support from the US and the  EU, concrete steps must be taken to form an economic alliance/”string of pearls” of ‘Indo-Pacific’ Nations, between countries like India, Japan, South Korea, Vietnam,  Australia, Philippines, Taiwan, Thailand and Indonesia, which can collectively replace Chinese global hegemony in the manufacturing and technological sectors. India must also ramp up the pressure on domestic companies to gauge and relook the extent of Chinese involvement in Indian companies especially any covert acquisition of Indians companies or their stocks and shares, whose UBO (Ultimate Beneficial Owner) is a Chinese entity. The Chinese have non-existent labour laws and flimsy wages. Hence their products are always cheaper compared to similar products of other countries. We must abrogate the "lowest price" principle, as far as the Chinese entities are concerned. National Security imperatives must override short term economic benefits.

Thirdly, it is not merely Pakistan that has illegally occupied a part of Jammu and Kashmir (PoJK) but a substantial part of it viz Aksai Chin and  Shaksgam Valley are under Chinese illegal occupation. We have seen repeated attempts by China to embarrass India by raking up the Kashmir issue at the United Nations. Not only should India strongly oppose such moves by aggressively but also highlight the Chinese duplicity on this issue. The ground position is that almost half of the areas shown in our map, comprising parts of Jammu, Kashmir, and Ladakh, are in the illegal occupation of China and Pakistan.

In  1950, the Chinese occupied 38,000 sq km of Aksai Chin (equivalent to the State of Kerala) which is the northeastern part of Ladakh. In 1963, a Sino-Pak agreement “gifted to the Chinese, more than 5,000 sq kms of the Shaksgam valley (an area north-west to the Siachen Glacier), which was a historically a part of the Gilgit region of J&K. Both Aksai Chin and Shaksgam are strategically important for the Chinese to connect their two largest provinces – Tibet and Xinjiang (Sinkiang). Undisputedly, Ladakh and Gilgit, in its entirety, were a part of Maharaja Gulab Singh’s Dogra kingdom, which merged into the Indian Union post-independence. The Dogra suzerainty over these areas was acknowledged by the Imperial British Empire also. Therefore Chinese has no tenable legal basis to continue to occupy Aksai Chi and the Shaksgam  Valley. In any case, Chinese legal claims aren’t superior to India’s.

Lastly, India must shed its traditional timorousness towards China. It is a bit rich for the Chinese to talk of “human rights”. Some of the worst human rights excesses have been committed on the minority Muslim  Uighurs population of Xinjiang by the Chinese but its “all-weather friend” Pakistan whose heart is every ready to bleed at the plight of the ‘Muslim Ummah’ in Kashmir considers the  Uighurs Muslim repression as an “internal matter of the Chinese”. This must take the gold medal for double standards. As we domestically battle the “Chinese Virus”, let us not forget that Corona is not the only problem that India has inherited from the Chinese.

(The views and opinions expressed within the article are the personal opinions of the author. The facts, analysis, assumptions and perspective appearing do not reflect the views of Republic TV/ Republic World/ ARG Outlier Media Pvt. Ltd.)

PEOPLE HAVE PLEDGED SO FAR
LATEST NEWS
View all
6 days ago
Pulwama: IEDs a potent weapon in the hands of terror outfits
20 hours ago
Why the PM Narendra Modi- US President Donald Trump call is vital
1 month ago
Would COVID & upcoming US Elections compel Trump to take a combative stand against China?
1 month ago
When People fail the Nation
1 month ago
Law and Humour