A giant sunspot dubbed Active Region 3038, or AR3038 has expanded three times the size of the Earth and may send out solar flares. 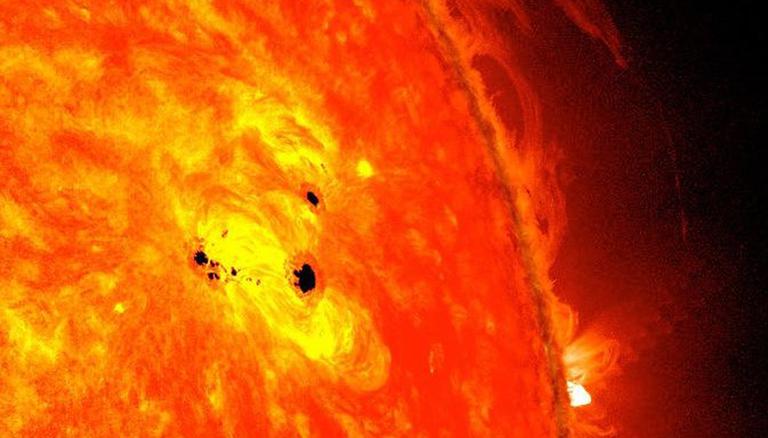 
A giant sunspot is currently facing our planet and has grown exponentially in the last few days. According to astronomers, the sunspot named Active Region 3038, or AR3038 has expanded three times the size of the Earth and may send out solar flares. However, the Space Weather Prediction Center managed by the National Oceanic and Atmospheric Administration (NOAA's) has issued no warning about any possible outbursts.

According to NASA, sunspots are the areas on the Sun's surface that form at areas where magnetic fields are particularly strong. Besides, they have a relatively darker appearance because they are cooler than other parts of the Sun’s surface, although the temperature around a sunspot is still 3,593°C. The reason why their temperature is lower is that the strong magnetic fields keep some of the heat within the Sun from reaching its surface.

Notably, it is the area around the sunspots that cause the solar flares to emerge. Solar flares are sudden bursts of energy that release a lot of radiation into outer space. NASA says that the solar flares are caused when the magnetic field lines near sunspots tangle, cross, and reorganize. These solar flares are often accompanied by a coronal mass ejection or CME, which basically are huge bubbles of radiation and particles from the Sun. They explode toward outer space at very high speeds when the Sun’s magnetic field lines suddenly reorganize. These are considered hazardous as they have the potential to disrupt our communication systems and cause blackouts.

READ | NASA concludes crucial test of SLS rocket for Artemis I mission; next stop is Moon

What about the sunspot AR3038?

As mentioned above, no warnings about any potential damage have been issued by experts but Tony Phillips, the author of SpaceWeather.com, revealed as per Space.com that the sunspot AR3038 has doubled in size in the last 24 hours. However, W. Dean Pesnell, project scientist of the Solar Dynamics Observatory said that there is no need to panic since "they happen all the time", Phys.Org reported.

Notably, different sizes of sunspots release different intensities of solar flares which are denoted by different alphabets. The A-class flares are considered to be of the lowest intensity, and the strength increases as we move toward B, C, M and all the way to X.