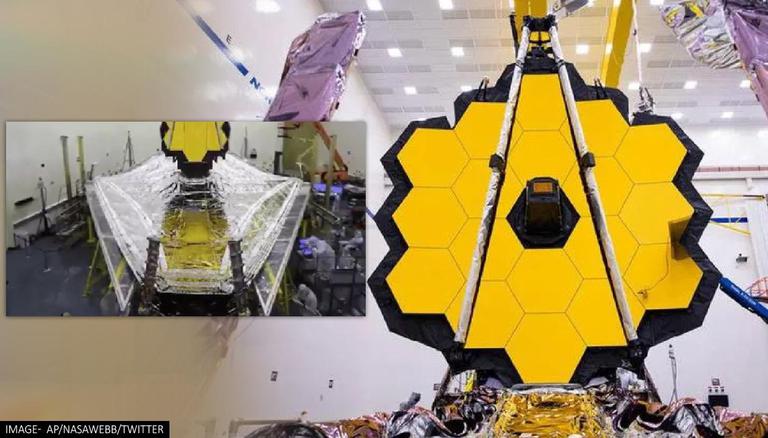 
The newest space telescope of the National Aeronautics and Space Administration (NASA) is on the edge of accomplishing the most complicated phase of its quest - unfolding and tightening a massive sunshield, after base controllers resolved a couple of issues, officials stated on Monday.

The James Webb Space Telescope's sunshield, which is basically the size of a tennis court, is now completely open and in the process of being extended tight. Further, as per the prediction, the procedure should be over by Wednesday, Associated Press reported.

Today we start tensioning the most Sun-facing layer of #NASAWebb's 5-layer, tennis court-sized sunshield. Read in depth how our sunshield works ➡️ https://t.co/cKIC6Qkz2r

The $10 billion James Webb Space Telescope, which is considered to be the world's biggest and most powerful astronomical observatory, was deployed from the European Space Agency's Kourou, French Guiana on Christmas Day. To accommodate into the European Ariane rocket, its sunshield and main mirror had to be folded.

'Everything is hunky-dory and doing well now': Experts on the sunshield opening process

Furthermore, according to project manager Bill Ochs, last Friday's extension of the sunshield was really a huge achievement for them. All 107 release pins were successfully opened. However, there were a few roadblocks.

Webb's solar panel had to be reconfigured by flight controllers in Maryland to gather additional electricity. With a consistent power supply, the observatory, which is the successor of the old Hubble Space Telescope, was never in any danger, according to Amy Lo, a chief engineer at Northrop Grumman, the telescope's primary contractor.

In addition to this, NASA has also redirected the telescope to reduce the amount of sunlight falling on six overheated motors. Officials stated that the motors had been cooled sufficiently to begin securing process of the sunshield, which is a three-day operation that could be delayed if the problem resurfaces. However, Lo added, "Everything is hunky-dory and doing well now," AP reported.

Moreover, if the process is successfully done in the scheduled time, then the telescope's gold-plated mirror, which spans over 21 feet, might be unveiled as early as this weekend. By the end of this January, Webb should have arrived at its destined location, which is 1 million miles away.

The observatory was over halfway there as of Monday. By the end of June, the infrared observatory should be scanning the cosmos, eventually revealing the earliest stars and galaxies produced 13.7 billion years ago, which is only 100 million years after the Big Bang, which created the universe.

READ | From DART to Artemis; NASA's most anticipated space projects set to launch in 2022