NASA recently shared a visual captured by the Hubble telescope wherein the auroras were seen glowing over the north pole of Jupiter. Have a look. 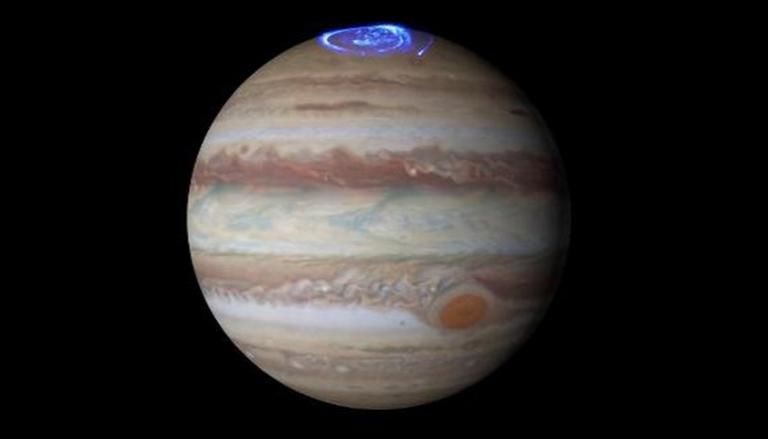 
If the habitability of planets in our solar system is ruled out, auroras remain one characteristic that can be found on many planets; all they need is a blanket of magnetosphere around them. While auroras on Earth are widely studied, this glowing phenomenon has been spotted on other planets like Mars, Jupiter, Saturn and Neptune.

Recently, NASA shared a visual captured by the Hubble telescope wherein the auroras were seen glowing over the north pole of Jupiter.

Earth isn’t the only planet that has auroras!

When charged particles from the #Sun strike Jupiter, they produce auroras hundreds of times more energetic than those on Earth.@NASAHubble captured this view of Jupiter’s ultraviolet aurora.

Scientists studying auroras on Earth have found that they are caused when the solar particles pushed by strong solar winds interact with the Earth's magnetosphere. Our planet, similar to an ozone layer, has a covering of magnetosphere, which forms by the magnetic fields emerging from Earth's core and offers protection against harmful solar radiation. However, when the solar winds are strong enough, they push the solar particles through the magnetosphere and when they interact with the Earth's atmosphere, auroras are created.

Interestingly, the solar particles give off the green and red light when they interact with oxygen and blue and purple light when they interact with nitrogen. However, scientists have found after observations through Hubble that auroras on Jupiter are bigger and more energetic than those on Earth. But the most interesting fact about Jupiter's auroras is that, unlike the Earth's, they are always there. Astronomers say that this is because the planet grabs charged particles from its surroundings including those being spilled out by its Moon, Io.

According to NASA, Hubble has observed Jupiter for months in the past and the video above has been created using the Hubble telescope's Imaging Spectrograph.

While much was not known about this phenomenon, the Juno spacecraft, which entered the gas giant's orbit in 2016 has helped scientists double down on its unique characteristics. Ever since its operations began five years ago, Juno has acted as the eyes and ears of NASA and has beamed back loads of data helping advance the study of planets in the outer solar system.