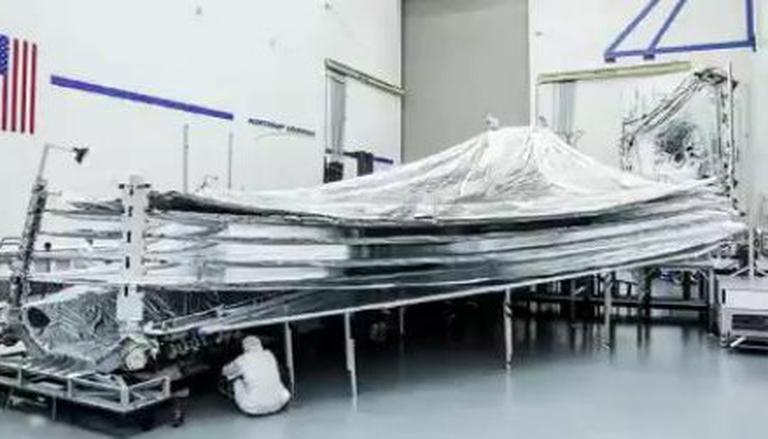 
Ensuring a strong start to the new year, scientists have successfully unfurled the majestic sun shields of the James Webb Space Telescope. In a blog post shared by NASA on January 1, the US space agency informed that the five-layered sun shields were unfurled following the successful extension of Webb’s second sun shield mid-boom structure marking another critical deployment milestone. The sun shield deployment process had been a nail-biting one for the scientists as it is one of the most important components of Webb.

Now that the unfurling is complete, the James Webb Space Telescope's sun shields, which measures 69.5 feet long and 46.5 feet wide, have taken the shape of a diamond, NASA revealed. "Shine bright like a diamond With the successful deployment of our right sunshield mid-boom, or “arm,” Webb’s sunshield has now taken on its diamond shape in space", the agency's tweet read.

With the successful deployment of our right sunshield mid-boom, or “arm,” Webb’s sunshield has now taken on its diamond shape in space. Next up: tensioning the 5 sunshield layers! https://t.co/6G2caS1djY #UnfoldTheUniverse pic.twitter.com/q0iuHdnKlN

The unfurling process was extremely delicate and required utter precision as there were 107 membrane release devices associated with the sun shield deployment. According to NASA, Webb has 178 devices or 'pins' called ‘non-explosive actuators’, and it was these 107 of those pins that kept the sun shield safe and folded prior to deployment. Owing to their expertise, scientists were able to release each of those pins making the unfurling possible. The process lasted two days and was initiated with the extension of the mid-booms that stretched the sun shields into a kite-like shape.

Keith Parrish, Webb observatory manager at NASA’s Goddard Space Flight Center said as per NASA's blog, "The mid-booms are the sun shield’s workhorse and do the heavy lifting to unfold and pull the membranes into that now-iconic shape. The team did what we had rehearsed for this kind of situation – stop, assess, and move forward methodically with a plan. We still have a long way to go with this whole deployment process".

As for the coming days, Webb engineers will separate and then individually tension each of the five sun shield layers to create space between the layers and allow the heat to radiate out. The Webb telescope was launched on December 25 to the second Lagrange point (L2) to detect even the faintest light in the infrared that emerged billions of years ago. And to do that, Webb's instruments must remain extremely cool, a job that will be done by the telescope's sun shields, NASA informed.